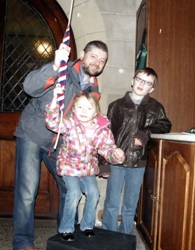 Bells rang out from churches across the world on Sunday December 6 in support of action on climate change.

The international event was organised by charities to coincide with the UN Climate Change Conference which took place in Poznan, Poland, from December 1-12.

This was the last opportunity for world leaders to meet to discuss action on climate change before the Copenhagen Climate Conference which will seek to replace the Kyoto Protocol when it runs out in 2012.

As part of the Day of Action on December 6, marches and demonstrations took place across the world. In Northern Ireland Christian Aid, Eco-congregation Ireland, Friends of the Earth, Tearfund and Trócaire teamed up to organise “Ring the Changes on Climate Change – the Countdown to Copenhagen.”

St Bartholomew’s in Stranmillis, Belfast, was among those in Connor Diocese which took part in the Ring the Changes event. Rector the Rev Ron Elsdon said he was glad the parish had participated, adding that many people had come to help ring the bells on the day.