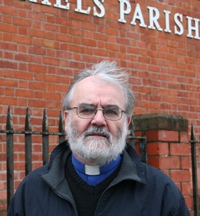 The Ven Barry Dodds. Archdeacon of Belfast, called for a cessation of hostilities in Gaza as he addressed a rally in Belfast on January 10.

Several thousand people attended the march and rally at Belfast City Hall, organised by the Irish Congress of Trade Unions (ICTU). They were addressed by speakers from the ICTU and representatives of the four main Churches

Archdeacon Dodds told the crowd the event was aimed at promoting a lasting and peaceful outcome to the ongoing issues in and around Gaza, as well as drawing attention to the huge humanitarian tragedy that was unfolding.

“The churches have been able to make some practical response this week,” he said.  “The Anglican Diocese of Jerusalem under its bishop, the Rt Revd Suheil Dawani, runs the Al Ahli Hospital in the heart of Gaza City. The Church of Ireland through its Bishops’ Appeal, World Aid Programme has made €25,000 available to Bishop Dawani for essential frontline medical and emergency humanitarian services at the hospital.

“Churches and dioceses including the cross-border Diocese of Clogher are organising specific times of prayer and special collections on behalf of the bereaved and sick and injured.”

Archdeacon Dodds went on: “Church people must be people of hope. We have good cause to be so, because of Jesus Christ. But also because we have witnessed in Northern Ireland after decades of violence the beginnings of a transition to peace, security and prosperity.

“The publicity flyer for this rally stated ‘each rocket and tank shell blows the hopes of a just and peaceful settlement further away’ and again ‘violence does not solve any political impasse.’ I would echo the words of our own Primate, Archbishop Alan Harper, and Cardinal Sean Brady whose joint statement of 30 December called for all hostilities to cease as a first step to enable aid agencies to do their work and permanent ceasefires to be negotiated.”

The Archdeacon concluded: “We shall continue to pray for the people of this region, Palestinian and Israeli, whose future hope must surely lie in two peoples living side by side in peace, security and prosperity.”