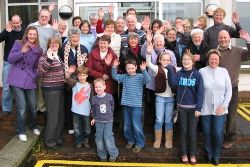 A group from St Paul’s, Lisburn, travelled to the Glenada Conference Centre in Newcastle, Co Down, for the first ever parish weekend away from January 9-11.

The weekend was organised by the rector, the Rev Jim Carson, and a cross-section of parishioners attended and thoroughly enjoyed their time away.

On the Friday evening Niall Manogue from the Church Mission Society spoke to the gathering. The main speaker through Saturday and Sunday was Paul Hoey, Church Pastoral Aid Society. The rector introduced the sessions, whilst Stephen McWhirter led the pre-breakfast prayer times.

A collection of thoughts about the weekend penned by those who took part!

“I found the weekend to be both entertaining and, with the talks of Paul Hoey and Niall Manogue, educationally a great help as I personally prepare for our trip to Kenya later this year. It was also an opportunity to engage with and find out more about other members of St. Paul's with whom I previously have had only a ‘nodding acquaintance.’”

“We had great fellowship and lots of fun, but above all was the feeling of God’s presence amongst us. Thank you to all who organised it and to those who could not go you missed a treat.”

“The weekend spent in Glenada, Newcastle was so uplifting spiritually and the fellowship, fun, accommodation and home cooking was tremendous. We personally got a lot out of it, we came back different people. This was an all age group weekend the youngest was 21 months and the oldest 84 years.”

The weekend away was part of a three year project in the parish called “Forward Together at home and abroad 2008-2010” which includes three strands, a trip to Kenya in September which Stephen McWhirter has helped with and mission at home.

Mission at home has been looked after by the rector and ministry team, involving the other two strands, building fellowship among church members, hence the weekend away which is the first of three, and a week of outreach from February 13-21 2010, with Roger Murphy and Paul Hoey being the main speakers.