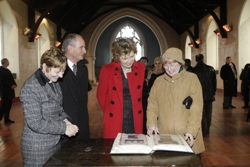 The President of Ireland praised those behind a cross community project in St Luke’s Church when she made her first official visit to the Shankill area.

President Mary McAleese said the Open Hands Centre, to be housed in the vacant St Luke’s building near the peaceline between the Falls and Lower Shankill would allow both communities to enjoy each other’s company as well as help bring the area back to life.

The Open Hands Centre project has been initiated by the Rev Edith Quirey, Bishop’s Curate of St Stephen’s (Millfield) and St Luke’s. St Luke’s closed for worship on January 1 2006, but Edith is now aiming to raise £1.5 million to reopen it as a cross community centre.

She first approached President McAleese by letter, then followed this up through other channels, resulting in an invitation for herself and Agnes Young, a member of Select Vestry, to dinner at the President’s home on January 23. They dined with President McAleese, her husband Martin and around 30 other couples. 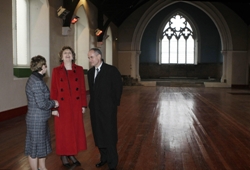 This was followed by an official visit to Northern Ireland by the President on Tuesday January 27, which included the visit to St Luke’s. Joining Edith to greet President and her husband were a number of people involved in the project, including Canon Will Murphy, representing the Bishop of Connor; the Ven Barry Dodds, Archdeacon of Belfast; the Chancellor of Connor, His Honor Judge Rodgers; and the Rev Jack Lamb from Townsends Street Presbyterian Church. Other guests included Cyril Mchiney and Basil O'Malley from CREED (Communities Regenerated, Enabled and Enriched); local businessmen from both sides of the community, and members of St Luke's parish and the Open Hands Centre.

Edith spoke to President McAleese about her vision for the church building, and Agnes Young showed her a book she had put together on the history of the church.

“Because she knows the Shankill area she has walked up and down the road many a time, and she said what we were doing was first class,” said Edith.

“They were very interested and spent around 15 minutes there before travelling down to St Stephen’s Church hall, to be welcomed by people from our own parish, and also St Mary's Chapel, St Peter's and Clonard Chapel.”

The President and her husband spoke to everyone there, and Canon Murphy said a few words on behalf of the Bishop.

Edith went on: “We all enjoyed tea and a chat before they left for their next engagement, assuring us they would support us in any way they could.”

A group of parishioners from St Stephen’s and St Luke’s will travel to the President’s home, Áras an Uachtaráin, for an official reception in March.