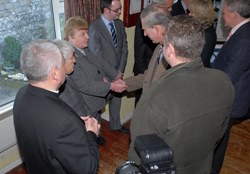 Glenarm village was royally honoured on Tuesday February 3 when the Prince of Wales and the Duchess of Cornwall called in for a visit.

The small coastal village was the first stop on the Royals’ day-long visit to the province, although their arrival was delayed by an hour when the weather in England upset the Prince Charles and Camilla’s travel plans.

The Rev Moreen Hutchinson, Priest-in-Charge of Ardclinis, Tickmacrecan, Layde and Cushendun, was among those to meet the Royal couple when they stopped off at the Community Office in Glenarm for a chat with local community groups.

“Prince Charles asked how long I had been in Glenarm and where the church was situated,” said Moreen.  “I was then invited by Lord and Lady Dunluce to Glenarm Castle for lunch, and after lunch Lord Dunluce chaired a meeting outlining how Glenarm could be regenerated. Prince Charles participated along with other community members and Sammy Wilson, [MP for East Antrim].” 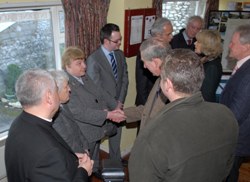 The Prince of Wales and Duchess of Cornwall had earlier braved the wind and zero temperatures at Glenarm Marina, where they talked to Adrian Morrow and staff from Glenarm organic salmon farm. The company is trying to get back on its feet after a freak attack by jellyfish 14 months ago wiped out the farm’s entire stock. The Royal couple also went on an impromptu walkabout through the village, much to the delight of local children and adults alike.

Among those to talk to Charles and Camilla was Jean Pullins, churchwarden at St Patrick’s Parish Church, Glenarm, whose brother William is Postmaster at the local post office. William, who is about to retire after 28 years in the job, said afterwards: “It was a great honour for the village that they came and I'm delighted they dropped into the post office. I was born in this building and succeeded my father as postmaster – between us we've done 50 years in the job.”

William said the Duchess had been intrigued by a display of signed celebrity photographs mounted on the post office wall. “She asked about the photographs and wondered if Cilla, Ant and Dec, Paul McCartney, David Jason and the others had ever visited.  “I explained I raise money in the post office for Great Ormond Street Hospital in London for children with leukaemia and that each time I responded to an appeal they sent me one of the photographs."