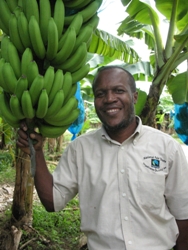 As part of Fairtrade Fortnight, Cornelius Lynch, a banana farmer, will visit two Larne parishes on Sunday March 1 to speak about his life and work.

Cornelius, who grows bananas on St Lucia in the Winward Islands, will be in St Cedma’s Church, Larne, at 10am and in St John’s, Glynn, at 11.30am.

Fairtrade Fortnight runs from February 23 until March 7.  Cornelius will speak from his positions both as a banana farmer and as manager of the St Lucia National Fairtrade Organisation in the West Indies.

Cornelius has been a farmer for 23 years and was closely involved with the establishment of the Fairtrade movement in St Lucia in 2000. He was among the first group of farmers whose bananas were exported to British supermarkets as Fairtrade in July of that year.

Bananas have been crucial to the economies of the Windward Islands for more than 50 years.  Successive reforms to the EU banana regime introduced in 1993 have steadily eroded the protection traditionally given to the islands’ producers, resulting in a dramatic decline in the fortunes of the banana export trade.  On top of this, farmers have to deal with natural disasters.  In 2007 Hurricane Dean destroyed almost all banana crops in Dominica and wiped out 75-80 per cent of bananas in St Lucia and 10 per cent in St Vincent.

Archdeacon Stephen Forde, rector of St Cedma’s and St John’s, said: “We look forward to meeting Cornelius, hearing about the lives of producers in the Windward Islands and learning how our purchasing habits affect the lives of these small scale farmers.”

He added: “Fairtrade guarantees a fair price to the farmers, but the social premium that is generated through the Fairtrade sales provides invaluable support for projects in rural communities throughout the Windward Islands.  We are happy that the monthly Fairtrade stall at St Cedma's goes a little way towards supporting Fairtrade producers worldwide.”

Everyone is welcome at the churches to hear Cornelius speak.