Institution at Holy Trinity and St Silas with Immanuel 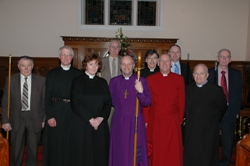 The Rev Rachel Creighton, former Chaplain to Wellingborough Prison, was instituted rector of Holy Trinity and St Silas with Immanuel at a service on Monday March 2.

A native of Fermanagh, Rachel comes ‘home’ to north Belfast after many years in England.

The 44-year-old grew up in Lisbellaw outside Enniskillen, but moved across the water to study in Nazareen College, Manchester. She worked as a lay worker in a church in Sheffield, before working as a nursing assistant and continuing her studies. Rachel later moved to Nottingham where she was a community development worker.

After training as a vicar, she was ordained a deacon in 1994, and was appointed curate in St Stephen and Hyson Green Parish, Nottingham. She was later curate at All Saints, Radford, also Nottingham, before becoming Priest-in Charge of Broxtowe, a large council estate.

In July 2002 Rachel went to Bedford Prison as Chaplain, before her move to HMP Wellingborough two years later.

The men’s prison was something Rachel was familiar with, having served a placement there. “I was very comfortable with it,” she said.

“The prison chaplaincy allowed me to continue working with people who were on the margins. All my parishes were had been in city or council estates,” she said. “Prison chaplaincy was also a break from parochial ministry.” 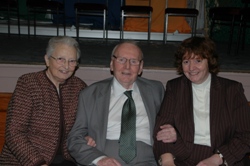 After almost seven years in prisons, Rachel said she now wanted to get back into the full breadth of her job. “In prison you are working with a slightly more limited remit, and you can feel you are losing touch with the core part of your job,” she said.

Rachel succeeds the former Canon Trevor Williams, now Bishop of Limerick and Killaloe, as rector of Holy Trinity and St Silas with Immanuel.  She said she was looking forward to her new role: “I felt I would like to come home to Northern Ireland, and it seemed more sensible to go back into an urban area than a rural area,” she said.

Photos by the Rev Ken Houston.