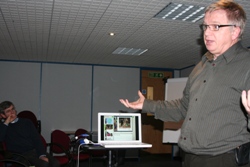 The META to Connor’s link diocese in Southern Sudan, Africa, is being co-ordinated by Church Mission Society Ireland, who hosted the launch meeting on March 9.

Among those attending the meeting were clergy, nurses, a GP, safety managers, a civil engineer and  a yoga teacher.

The Ven Stephen Forde, Archdeacon of Dalriada and chair of Connor Council for Mission, introduced Billy Smyth, a former CMS mission partner, who moved from Uganda into southern Sudan even before a peace agreement ending 20 years of civil war was signed in 2004. It was partly due to Billy and his wife Jenny that the Yei link was established. 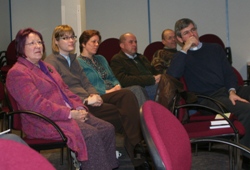 “Yei is a partnership which is growing and is taking central stage,” said Archdeacon Forde, who travelled to Yei in January 2007 to sigh the partnership agreement.

Referring to the ongoing Yei Schools Project through which parishes in Connor have helped build a new school in Mongo, Archdeacon Forde said: “That has only ever been the first step and was a way of raising awareness of the partnership. The next and perhaps more important step is to allow people from Connor to make their way out to Yei to experience Yei, the people and the Church there.”

David Gough, CMSI Regional Mission Partner for Sudan, give a brief outline of the work of CMSI. In relation to the Connor Yei link, he said: “Partnership is crucial. It is not about building a school. It has to go beyond that. Partnership is never just about saying we are in partnership with Yei, Edinburgh or Linkoping, it is about action.” 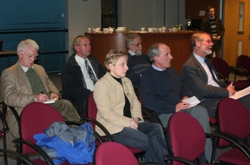 He explained a bit about Sudan, which as a central African country is almost the size of western Europe. Yei Diocese lies close to the borders of Uganda, Kenya and the Democratic Republic of Congo. The roads infrastructure is poor – it can take six and a half hours to make the 46 mile journey to the Ugandan border along the ‘main’ road, which is little more than a pitted dirt track. The capital, Juba, is growing rapidly, but, four years after the signing of the peace agreements, the government of Southern Sudan is struggling to meet the expectations, both international and of its own people.

UN troops are still on the ground, tens of thousands of refugees continue to return home every month, causing tensions over land claims and pressure on water supplies. The cost of living in Yei is spiralling.

David said META was all about experience, about going out and using a skill to do a job. “But you will not be doing a full days work every day that you are there, it is more about cultural experience and relationship building, it is about developing partnership,” he explained.

He said those wishing to join the team had to submit an application form [relevant only for the Yei META trip, closing date March 23], and would then be interviewed. If successful they would have to attend at least three training sessions, including a preparation weekend.

To give those at the meeting a better idea of what they might expect if they do go to Sudan, Archdeacon Forde outlined his own expectations and experiences. He also displayed some photographs of his 2007 trip. The sight of the small aircraft which takes passengers from Entebbe Airport to Yei gave rise to a few worried groans!

“Yei is a green fertile land that can well support the people who live there. It is a land of generous, warm-hearted people,” he said. He spoke about the food, the accommodation, the Vocational College, the Theological College and the Martha Clinic which now operates as a centre for preventative medicine, as a new health centre is now operational.

Questions were asked about the climate, wildlife, particularly of the creep crawlie kind, and security – David Gough revealed there have been some attacks by the Lords’ Resistence Army, a rebel force originating from northern Uganda. But he said the security of members of the META was paramount, and if the area was deemed too risky the trip would be postponed, although he stressed this was unlikely.

The dates for the Connor META trip are scheduled from September 22 until October 2 2009, spending seven days in Yei. The cost is likely to be in the region of £1,500 per person. Deadline for applications is March 23, and anyone wanting further information should contact David Gough at davidgough@cmsireland.org or telephone 028 9077 5020. Application forms should also be returned to David Gough.