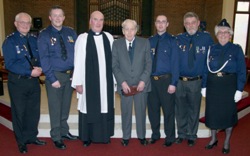 Members of St Hilda’s CLB and CGB led the prayers.  Alan Yarr presided at the organ and led the congregational hymns that included ‘Seek ye first the Kingdom of God’, ‘One more step along the way I go’ and ‘Fight the good fight’. 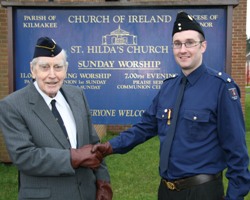 During the service, 92-year-old Major McIlroy took part in the dedication of a window celebrating 50 years of St Hilda’s CLB and CGB.  Originally from Sandy Lane, Tullynacross, Edgar joined Lambeg Jubilee Company in 1935 and after getting married in 1939 he moved to Glenburn Road, Dunmurry.

During refreshments, which followed the service, members past and present enjoyed a chat with Edgar as he recalled his long service at St Hilda’s and memories of just green fields prior to the building of the Seymour Hill housing

estate in the 1950s and the present modern church, which was consecrated in December 1970.