Curate joins teenagers on trip to the Somme 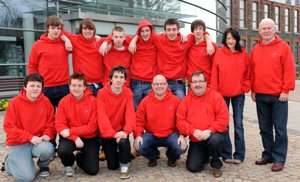 The Rev Campbell Dixon, curate in St Patrick’s, Jordanstown, accompanied a cross community group of 17-year-olds to the Somme area on a ‘Journey of Remembrance.’

The teenagers were all from the secondary schools in the Newtownabbey Borough Council area and Campbell travelled as chaplain.

The visit aimed to provide a history of the lead up to the Somme and how this impacted on both the Protestant and Roman Catholic community in the north and south of Ireland.

In a seven week programme of lectures including visits to the Somme Heritage Centre and Kilmainham Gaol prior to the trip, the young people were provided with an overview of the political influences that led to so many young men from both traditions leaving these shores for the battlefields of the Somme.

Campbell said: “I conducted two Services of Remembrance in respect of soldiers from both communities at the Ulster tower Thiepval and at the Wijtschate Cemetery (16 Irish Division)  and also nine acts of remembrance in relation to a number of soldiers whose background the young people had researched and whose graves/inscriptions they had to locate  in the various cemeteries we visited.

“The young people were then presented with the actual medals awarded to the families of the soldiers they researched which were obtained by the community relations department of Newtownabbey Council.”

Campbell added:  “I don’t think that I will lightly forget this visit.  It certainly was a tremendous learning experience and I was greatly humbled as we visited the cemeteries to see literally thousands of headstones and inscriptions of those who paid the supreme sacrifice.

“It was a genuine pleasure to accompany this small group of students who were a credit to their school, their families and themselves. ‘At the going down of the sun and in the morning we will remember them.’”

In Flanders fields the poppies blow
Between the crosses, row on row,
That mark our place; and in the sky
The larks, still bravely singing, fly
Scarce heard amid the guns below.
We are the Dead. Short days ago
We lived, felt dawn, saw sunset glow,
Loved and were loved, and now we lie
In Flanders fields.

Take up our quarrel with the foe:
To you from failing hands we throw
The torch; be yours to hold it high.
If ye break faith with us who die
We shall not sleep,
though poppies grow
In Flanders fields.