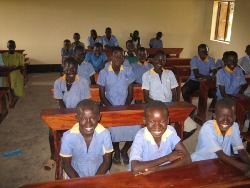 Connor Council for Mission is urging parishes in the diocese to make a final push to ensure all the funds needed for the new primary school in Yei, Southern Sudan, are raised.

All of the £92,300 raised in the Diocese of Connor over the past two years to date has now been transferred to Connor’s link diocese of  Yei for the building of Mongo Primary School.

With the completion of Blocks One and Two, the most recent report from Yei indicates that the final Block Three is now up to roof level. It is estimated that $20,000 remains to be raised by Connor Diocese in order to complete funding the entire school building.

Money raised by members of the Cathedral Chapter of Connor who are taking part in a sponsored walk from Belfast Cathedral to Lisburn Cathedral on Saturday June 6 ( part of the Chapter’s 400th Anniversary celebrations) will be given to the Mongo School building project.

The Bishop of Connor, the Rt Rev Alan Abernethy,  and the rector of Ballymena, the Rev Canon Stuart Lloyd,  shall also do a sponsored cycle ride from Connor to Lisburn as part of the celebrations.

Archdeacon Stephen Forde, chair of Connor Council for Mission, said: “Not withstanding the current economic difficulties, the Council for Mission will be encouraging  further fund raising to ensure that all the necessary money has been raised by the end of 2009.”