Members of the Chapter of St Saviour, Connor, have raised in excess of £5,000 for Mongo School in Yei by doing a sponsored walk. 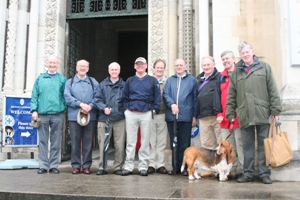 Rain did not deter the hardy Chapter as nine men and a dog stepped out to hike from Belfast Cathedral to Lisburn Cathedral on June 6.

The Chapter members were marking the 400th anniversary of the founding of the Chapter of St Saviour in Lisburn Cathedral.

They were also raising funds to help Connor Diocese build a new school in the town of Mongo in Connor’s link diocese of Yei in southern Sudan. 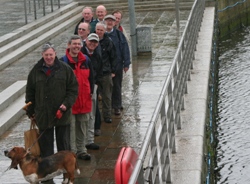 They left St Anne’s Cathedral at 1pm and followed the Lagan towpath from the Waterfront to Lisburn, finishing at the Cathedral of Christ Church, Lisburn. The first clergy reached the end at 4.30pm after three and a half hour’s walking, while the last group arrived in Lisburn shortly after 6pm.

The walk presented a challenge to Dean Bond’s six-year-old Bassett hound, Ben. “Ben had been a little lame last week and I wondered about him participating at all,” said the Dean. “The last two miles were hard on him but he made it.”

Dean Bond thanked his fellow members of the Chapter for their efforts. Sponsorship money is being counted but is estimated to have passed the £5,000 mark. 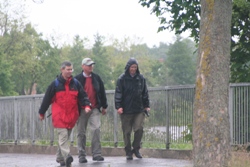 “It was very worthwhile and while we may not have been totally favoured by the elements the liquid sunshine was just a slight inconvenience compared with where this money is going to to benefit the young people in the school in Mongo,” said Dean Bond.

“The weather helped us get things in perspective. Compared with our brothers and sisters in that part of the world we are all millionaires.”

For Dean Bond the sponsored walk was also a personal challenge. “I am just so thankful to God that I was able to do it,” he said. “I had a triple by-pass operation six years 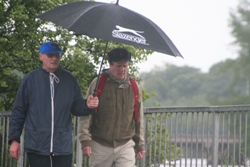 ago and yet I was able to get into my car after the walk and drive home and it hadn’t taken a feather out of me. I am not saying this with any sense of bravado, but with a sense of deep gratitude to God.”

Continuing the Chapter’s 400th anniversary celebrations, a service of Holy Communion will be held in Lisburn Cathedral on Tuesday June 9 when the preacher will be the Rt Rev Alan Abernethy, Bishop of Connor, and this will be followed by a Chapter Dinner in Malone Golf Club.

Anyone interested in sponsoring the Chapter on its successful 400th anniversary walk can contact Dean Bond on 028 25861215 or email dean@connor.anglican.org. 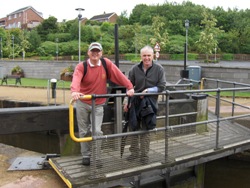 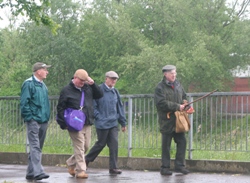 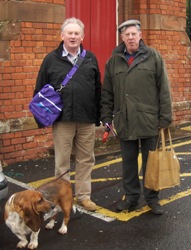 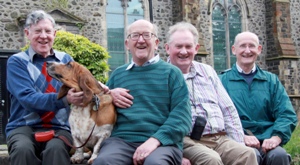