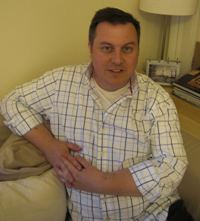 The father-of-three was born in Ballymoney and lived in Portstewart until the age of five when his family moved to Bangor, Co Down. After studying at Bangor Grammar School, Roger went to Edinburgh College of Art to study architecture and also spent a year at Rhode Island School of Design in the USA.

On his return he worked part-time as an architect and part-time doing various jobs for St Paul’s and St George’s Church in Edinburgh. He was ordained in 1999 and since then has been at St Peter’s, Musselburgh and St Andrew’s, Prestonpans, initially as curate and since 2002 in the capacity of rector.

Roger is looking forward to the move to St Patrick’s, Coleraine, a parish he has had close links with as a result of a mission partnership which began when he was with St Paul’s and St George’s in 1995 and continued over the years.

Roger is married to Sarah, an artist, and the couple’s children Josh, Sophie and Rebecca will turn five, three and one respectively on their next birthdays.

Roger said: “It will be nice to be back in Northern Ireland. The move is a big step for us but we are really looking forward to it and are delighted to be coming back to somewhere familiar, and to a parish which really enthuses us.”

A Service of Institution will take place in St Patrick's on Friday, September 25.