Institution of youngest rector in Church of Ireland 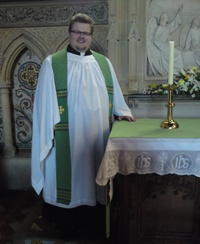 The Rev Adrian Dorrian was instituted Rector of St Peter and St James, Belfast, at a service in St Peter’s Church on Monday June 22.

At just 27-years-old, Adrian is believed to be the youngest rector serving in the Church of Ireland at present.

A native of Groomsport, Co Down, he grew up in Groomsport Parish where he was a Sunday School teacher, Church Warden, and BB officer. He studied at Bangor Grammar School and later graduated from Queen’s University, Belfast, with a degree in Theology and Drama in 2003.

Adrian was employed as a youth drama worker with the Christian outreach Youth Initiative project in Poleglass for a year, before studying at Theological College in Dublin for two years. He was ordained a deacon in June 2006 and was priested a year later. He has served as curate assistant in the Parish of Newtownards since his ordination.

Adrian is chairman of the Down and Dromore Youth Council and also serves on the Executive of the Church of Ireland Mens’ Society and the Liturgical Advisory Committee.

Speaking of his new role, Adrian said: “I am very excited about the challenges ahead. This is new to me in a lot of ways and I am looking forward to getting to know the diocese better and to working with Bishop Alan. It is exciting to think that I am now a rector and I believe that I am in the right place.”