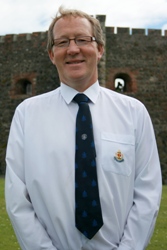 The Captain of  8th Carrickfergus Boys’ Brigade Company based at Holy Trinity Parish Church, Woodburn, has been awarded an MBE in the Queen’s Birthday Honours.

Drew Buchanan has been captain of 8th Carrickfergus Company for the last 17 years and has more than 40 years BB experience.

Drew joined the Robins in 1963 in the 108th Belfast Company, St Barnabas Parish Church, Duncairn Gardens, Belfast, were he progressed through the ranks obtaining his Queen’s Badge in 1975.

He went on to form and captain the 1st Brookeborough Company (Aghavea Parish Church) in County Fermanagh before moving on to 1st Armagh Company.

Drew is presently Treasurer and President elect of the East Antrim Battalion of the Boys’ Brigade.

Drew said: “It is a great honour to be awarded the MBE. I would thank my wife Karen for all her support over the years and to all the officers and the 125 boys of my company. This is recognition for them also that the BB is as relevant today in bringing the gospel message to boys as it was 125 years ago when it was founded.”

He added:  “It’s good that voluntary youth work has been acknowledged by this award because there are many men and women who give up their time each week as officers and leaders in BBs throughout the Carrickfergus.”

Drew will take up the position of President of East Antrim at the start of September.