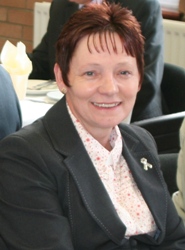 A Service of Institution for the Rev Edith Quirey as rector of St Stephen and St Luke, Belfast, took  place on Monday July 6.

Edith was Priest-in Charge of St Stephen and St Luke for three years and during this time St Luke’s Church closed for worship and united with St Stephen’s. A year ago she was appointed Bishop’s Curate of the parishes.

Edith said: “It is only a name but it is nice for the congregation and for me to be officially recognised. For me it will be nice to be rector of a parish I have worked in for four years. It is a great honour. It means a lot for the parish to have a service of institution.”

Edith is married to Jim and the couple has a son, two daughters and six grandchildren.

Edith was instituted rector of St Stephen and St Luke by the Bishop of Connor the Rt Rev Alan Abernethy.

This was the fourth institution in Connor Diocese in the space of two weeks.