Menu
Home > News > Megan looks back on a year in Argentina

Megan looks back on a year in Argentina 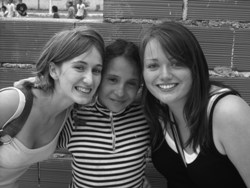 Megan Johnston, a member Lisburn Cathedral, has recently returned from a gap year with SAMS, the South American Mission Society, in Argentina.

Megan was based in Salta, in the north of the country. Last summer, a group of young people from the cathedral spent three weeks in the area as part of SAMS’ Beyond the Norm project.

Megan was a volunteer with SAMS’ Red Box Project, which has the following core aims:

“I spent nine months of my gap year in Salta, Northern Argentina as a volunteer with SAMS Ireland. I was based in a local Church called “El Redentor” where I was a leader of the children’s Bible study club. I participated in the weekly youth group and worked as the Pastor’s secretary.

“I taught in private and public schools helping as a language assistant, which you can imagine really opened up my eyes to the extremes in society. I had my own English classes, which were a real blessing during my time in Salta as I have no teaching qualifications, although it was encouraging to experience God’s hand at work. Please pray for my students as they still continue with my online English classes, that they would have an open mind to learn.

“My time in Salta was significant as I learnt many things such as relying wholeheartedly on God. It was also character building and an opportunity to learn things about myself.

“Having made life-long friends and extended family in Argentina, I know that if God calls, one day I will return to Salta, it would also be exciting to see how much the people have developed and strengthened not only in their faith but also as a Church body. This is my prayer.

For further information about SAMS visit the society’s website.