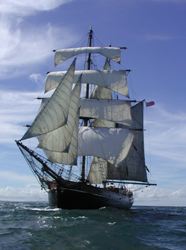 In recent days seaside towns and villages across Connor Diocese have witnessed the majestic sight of dozens of tall ships approaching their coastline in preparation for the Tall Ships Festival.

It is 18 years since the tall ships last visited Belfast, and the four-day event at Belfast Docks has generated huge public interest.

An estimated 400,000 people will flock from far and wide to look at and board the 40 ships docked in the city.

In the midst of all this, the Belfast Mission to Seafarers continues its daily work of reaching out and offering facilities to seafarers from all over the globe.

Canon Douglas Goddard, Senior Chaplain to the Mission to Seafarers in Belfast, said many of those who sailed their tall ships into the city were aware of the mission’s work.  “We have had a number of the seafarers taking part in the Tall Ships event in the mission using our internet café or phoning home as our international phone card allows them to make long distance calls for much less,” he said. 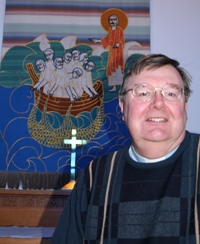 “Some of the captains have been into the centre. Many of the permanent crew of the ships would be very familiar with the mission.”

Canon Goddard was among the guests at a Captains' Dinner on Thursday night, when he was called upon the say Grace. “I was talking to a lot of the captains at that. It was great opportunity to mix and meet people,” Canon Goddard said.

The stories he heard indicated conditions on the crossing from Halifax, Canada, the final race in the 2009 Tall Ships Challenge, had not made for plain sailing for many of the crews, with gales and huge waves battering the ships for several days.  “It would not be something I would really like to do,” he said. “It all looks and sounds very glamorous sailing the oceans of the world, but the reality is rather different.”

The race got underway in Vigo on the northwest corner of Spain on May 3 from where the ships sailed 900 nautical miles south-south-west to Tenerife in the Canary Islands arriving on May 14 and departing three days later to race the 2,600 nautical miles westward to Bermuda, arriving on June 11 and staying until June 15. Here the ships and crews were the centrepiece of the island’s celebrations of its 400th anniversary.

The fleet then raced to Charleston on the US east coast, staying there from June 25-29 before proceeding to Boston (July 8-13 July). A cruise in company of a further 370 miles north-north-east brought the ships to Halifax (July16-20), where celebrations included the 250th anniversary of the Naval Port.

The final race to Belfast started on July 20, covering a distance of 2,350 nautical miles. Celebrations at Belfast Docks continue until the flotilla of ships departs the city on Sunday August 16.