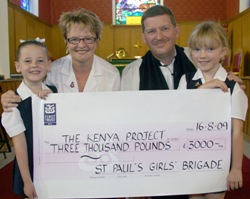 A farewell service was held on Sunday August 16 for a team from St Paul’s, Lisburn, who are travelling to Kajaido Diocese in Kenya this month.

The team will go in two groups, with one departing on August 21 and the second group heading to Kenya a week later.

The team is led by the rector of St Paul’s, the Rev Jim Carson, assisted by Stephen McWhirter. On Sunday August 23 the team will be involved in worship in Kajaido Cathedral, and during their first week team members will be doing some ‘bike’ classes and looking at the building programme at the Maasai Girls School. 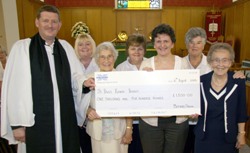 The St Paul’s team to Kajaido has four main aims….
 to provide the motor-bikes for use by the Diocese
 to help build a School for Maasai girls
 to learn from and have fellowship with the people there
 to extend our links in a tangible way in the future

In consultation with Ronnie Briggs, Church Mission Society Ireland (CMSI) Mission Partner in Kajaido, the parish raised £3,000 through a church collection and donations in June 2008 for a first motorbike. This was dedicated at a special service in Kajaido on November 16 last by Bishop Taama of Kajiado.

This is the first of another five motorbikes the parish are providing to coincide with the team’s visit. These came through St Paul’s Girls Brigade, a generous gift by a parishioner, Wallace Grammar School and fund-raising in the parish.

This is part of a three year project called ‘Forward Together in Faith and Mission, at home and abroad, 2008-2010‘ which also includes a week of outreach in February 2010 which may also include some participation from Kajaido.