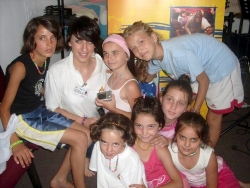 Lauren Mulholland, a sub-officer in St Paul’s Girls Brigade, Lisburn, spent a week in Kosova during July as a member of the GB Europe Summer ’09 Mission Team.

The mission initiative was organised in partnership with Smile International, and during the week Lauren worked with a new GB company.

In preparation for the trip, Lauren spent a weekend in June at the GB Europe conference and briefing in Glasgow, where she and the others in the team learnt about the activity they would be involved in which included children’s work, aid distribution, sharing about GB and learning about and sharing faith.

Lauren left for Kosovo on Monday July 6 and was joined by girls from England and Scotland.

Being the only girl representing GB Ireland, she admitted to being a little bit apprehensive initially, but said she was very excited about the challenge and experience ahead in working with the first ever Girls Brigade Company in Kosova. 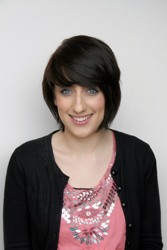 The team of 13 girls stayed at the Smile Centre, a Christian conference centre in Gjakova.  Each day they travelled to Eternity Church, a small building where a new GB Company was formed this year.

Lauren and the team led the first ever GB holiday bible club there and were eagerly greeted by the members.  Morning sessions began with worship followed by a bible story shared by one of the team; afternoon sessions involved crafts and games topical to the biblical theme.

Lauren  said she found the children so appreciative and eager to learn about the gospel message and also about her life in Northern Ireland.  After a most enjoyable week, they treated the girls to an ice cream sundae at a local Kosovan café.

The ethnic cleansing of Kosova by the Serbs resulted in more than one million refugees.  Ten thousand men were killed leaving many widows and fatherless children, many of which are still living in appalling conditions.  During the mission Lauren and the team had the privilege of being welcomed into the homes of some war victims.

“Although their home lives are basic and deprived, the welcome and hospitality we received was most loving and truly amazing,” said Lauren. “ Even though these people have very little, they were extremely generous to share what little they had with the team, an experience I found most humbling.”

Lauren, who last year gained the Queen’s Award, the highest award a girl can achieve during her years in Girls’ Brigade, concluded: “My trip to Kosova was most rewarding and worthwhile, developing a passion within me for the people of this war torn country.

“It was very exciting to be involved in working with the first ever Girls Brigade Company in Kosova.  It is my desire to create a strong link between Girls Brigade Kosova and Girls Brigade Northern Ireland and I hope to return and visit my new friends in the near future.  It was an amazing experience, and I would encourage anyone interested to get involved – prayerfully, financially or experience Kosovan life hands on”.