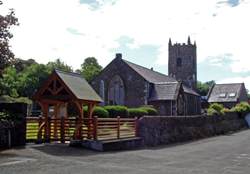 Parishioners of St Cedma’s Church, Larne, are battling a planning proposal which could see a Tesco superstore built only meters from the historic church.

St Cedma’s select vestry has written to the Planning Service to lodge a formal objection to Tesco’s application for a superstore at Inver Park football ground which is next door to the church.

Members are urging all parishioners to sound their objections.

The application also entails a multi-level car park linked by a bridge to a new roundabout on the A8 dual carriageway.

Putting its case forward, the select vestry of St Cedma’s has asked planners to consider that the scale of the proposed Tesco would ‘entirely dominate’ the church site, which dates from the time of St Patrick in the fifth century.

Traffic congestion, a right of way and questions over the sustainablility of continued superstore development in Larne are also raised. 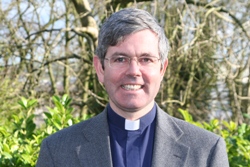 The select vestry points out: “The current church was part of the Augustinian monastery at Invermore, signs of which remained until the 19th century.

“Following the dissolution of the monasteries by Henry VIII, the church has been in continuous use as the parish church of Inver. This makes St Cedma’s the second-oldest church in continuous use in County Antrim and the site and its surroundings of a significant and sensitive historical character.”

Rector of St Cedma’s, the Ven Stephen Forde, Archdeacon of Dalriada, said the proposed floor level of the store, at 16.3m, is the same height as the church clock

“The deck of the multilevel car park, at the same height, will be built within 9m of the parish hall, beside St Cedma's,” Archdeacon Forde said.  “We will also lose most of our on street cark parking, making access for funerals, weddings and disabled people all extremely difficult.

“We would like the plans to be substantially amended.”

Larne Borough Council has agreed to sell Inver Park to Tesco for £5.1m. The deal is subject to vacant possession and the tenant, Larne Football Club, has stated it will not be moved from the ground.