The Rt Rev Alan Abernethy was petitioned to dedicate the memorial window by Her Royal Highness the Countess of Wessex, Colonel-in-Chief of the QARANC.

More than 500 serving and retired men and women and their families attended the interdenominational service which recognised the dedication and work of thousands of military nurses.

Before joining the congregation the Countess also had the opportunity to meet a number of other guests including Major Bunnie Foulkes, chair of the Northern Ireland Branch of the QARANC Association, Belfast Mayor Councillor Naomi Long, MLA,  and Health Minister Michael McGimpsey, MLA.

For the formal dedication of the window, the Dean escorted HRH to the south side of the Sanctuary where the window was installed in 2007. Here the Countess petitioned the Bishop of Connor to dedicate the stained glass memorial, depicting the Corps’ badge, in remembrance of the service given in times of peace and conflict by members of the Corps.

In his address the Dean said the window had been an ‘almighty challenge’ to represent the story of the dedicated and costly service of Army nurses since 1854. “It is a story which has its origins in the Crimean War and the insights and experiences of Florence Nightingale and her pioneer companions. It is a story which is inseparable from the very backbone of British and Commonwealth history, of service in war and peace,” he said.

He spoke of the ‘costly professional and personal sacrifice’ of the Queen Alexandra’s and of their need to respond almost continually to changes in medical facilities and to new medical insights gained in battlefield hospitals and research institutes.

Dean McKelvey said: “Fundamentally, this window seeks to honour a story about people. People who played their part, who when the call came answered, and when danger came, stood their ground, caring all the time.”

Following the service Her Royal Highness was guest of honour at a QARANC reception in the Cathedral hall. She received an engraved crystal rose bowl presented by Corporal Ellen Taylor in recognition of her visit. 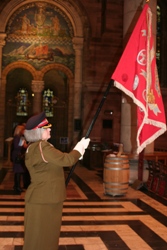