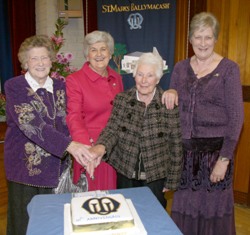 The members of St Mark’s, Ballymacash, Mothers’ Union celebrated their 50th anniversary on Sunday October 18 in the context of the Harvest Festival and Thanksgiving for the successful completion of St Mark’s recent Stewardship Renewal Programme, Forward in Faith.

The present Enrolling Member is Mrs Kaye Somerville who led the prayers at the 50th anniversary service and presided at the reception afterwards.  The special speaker at the service was Mrs Margaret Crawford, All-Ireland President of the Mothers’ Union.  The lessons were read by Mrs Moira Thom, Connor Diocesan President and Mrs Mae Moreland, Area Chairperson.

A special cake was presented for the anniversary and the cutting ceremony was carried out by two of the foundation members of the branch, Mrs Jesse Agnew and Mrs Eva Ritchie.  With more than 60 members St Mark’s is one of the largest Mothers’ Union branches in the Diocese of Connor.