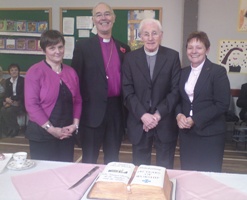 Church of Ireland Primate Archbishop Alan Harper was the guest preacher at a special service to celebrate the 140th anniversary of the parish of St Stephen, Millfield, Belfast, on Sunday October 25.

Following the 11.30am service, Archbishop Harper joined parishioners from the united parishes of St Stephen and St Luke and other guests for tea and anniversary cake.

Opened in 1869, St Stephen is believed to be the first free church in Belfast – somewhere parishioners did not have to pay to sit in the pews. During the construction of Millfield in the 1970s, the original facade of the church was taken away, and replaced with the current facade incorporating the tower and the cross that is lit up every night. The rest of the original building remains. 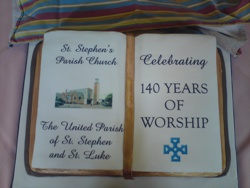 The Rev Edith Quirey, rector of St Stephen’s and St Luke’s, said Archbishop Harper had been very supportive when he was Bishop of Connor and had appointed her Priest-in Charge of the parishes.  In July, she was instituted rector by the present Bishop of Connor, the Rt Rev Alan Abernethy.

Edith said she and her parishioners were delighted the Archbishop had agreed to preach on this special anniversary. “It is a big occasion for the church and it meant a lot to the parishioners to have the Primate preaching at the service,” she said.