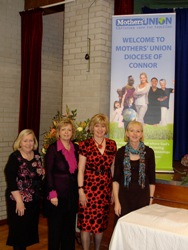 More than  300 members  of Connor diocesan Mothers’ Union  gathered  at  St  Mark’s, Ballymacash, on Thursday October 26  for  the  launch  of a book celebrating 40 years of the O’Neill Cup.

‘Thanks for the  Memories’  is a collection of more than 70 stories and reflections penned by branches across the diocese.  Stories  are  a  mix  of  historical  records  and   humorous  adventures – a  real  reflection  of  life  in  MU  over  the  decades.

The  launch  was  a  night  of  entertainment  with  guests  The  Sepon  String  Quartet,  storytelling , poetry  and  interviews  with  all  living  Past  Presidents  who  were  uniquely  gathered  as  a  group.  All  of 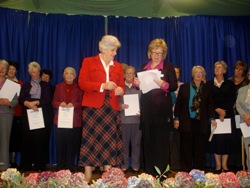 the  participating  branches  were  presented  with  certificates  of  commendation  by  the  All  Ireland  President ,  Margaret  Crawford,  and  the  evening  ended  with  community  singing  including  a  song  specially  composed  by Connor Vice President  Kathleen  Rodgers. 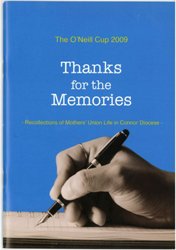