Clergy from all over Connor Diocese gathered at the Slieve Russell Hotel, Co Cavan, for the first clergy conference in almost four years.

The event ran from November 11-13 and the guest speakers were the Rt Rev Richard Henderson, Bishop of Tuam, Killala and Achonry and Mr Mark Russell, Chief Executive of the Church Army. Both challenged and inspired in their daily sessions and left the 80 clergy in attendance with more than a little food for thought.

It was a time for discussion and debate, a time for worship, and also a time for relaxation and fellowship. Services took place over the three days, with inspirational liturgy prepared by the Rev Peter McDowell, rector of Holy Trinity, Ballywillan, Portrush, and wonderful music from Mrs Lorna Palmer, Director of Music in Ballycastle Parish, on keyboard, and the Rev Canon John Mann, St John’s Malone, on violin. 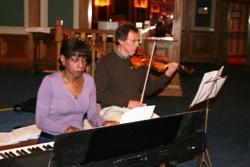 The conference got underway on Wednesday 11 November with Opening Eucharist followed by a first session on the theme ‘Getting to the heart of the matter’ with Bishop Richard. In this he spoke about  ‘the heart of God.’ As it was Remembrance Day, he reflected on the importance of remembering, and spoke about the Trinity and how, for him, it has become ‘the most important doctrine and basis on which I live.’

In his first conference address, Mark Russell acknowledged the ‘huge pressure’ clergy have to work under, and thanked them for their faithfulness in God and for the work they do. He said clergy spend so much time looking after worship and pastoral care in their parishes they had little time left for those who ‘never darken the door of a church.’

Mark added: “Nothing will make your church more relevant or real than new Christians. They will shine a light on your church where it needs to change. Evangelism changes the world and the world comes into your church.” 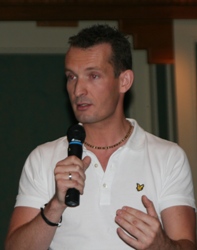 He said the world had changed and a lot of churches were not reaching significant numbers of people. Using Powerpoint images to highlight his message, Mark said things were changing but the church was standing still. “This is not about changing the Gospel, it is not about compromising, it is about learning how to communicate in a way that this culture will hear. We cannot shout ‘Jesus is the answer’ if we don’t not let people ask the question.

“Evangelism in the 21st century begins with us asking questions of the people around us.”

Following dinner clergy again united for evening worship, led by Peter McDowell, who also led Morning Prayer on the Thursday. Bishop Richard spoke on The Heart of Jesus, why we are made in God’s image and why that matters. He emphasised that equality should be given to the Father, Son and Holy Spirit. The Bishop used a piece of rope to illustrate the Trinity and separation. “Even atheists seem to be looking for something,” he said. 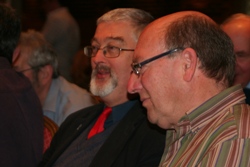 Mark’s young PA, Sam Follett, told the conference how he had lived for a time in a poor suburb of Berkley, Australia, as part of the Church Army’s Explore project.  Here the majority of people were two or three generation unchurched, and it was here Sam was involved in the ‘Adopt a Block’ project, where Christians visited the same houses at the same time every week. They introduced themselves and talked to people. “We did not even mention Jesus on the first visit,” he said. And eventually, many of those people became Christians. 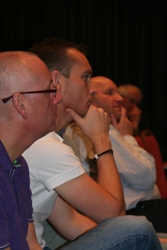 There was free time on the second afternoon of the conference, with some clergy opting for golf, shopping, walking in the grounds, or making use of the hotels extensive leisure and spa facilities.

Before dinner that evening, Bishop Alan held an open session, and at this Canon John Mann launched the Diocese of Connor 2011 Pilgrimage to the Holy Land. This 11-day pilgrimage will be based in Jerusalem and Galilee and will include trips to Bethlehem, Capernaum, the Sea of Galilee, the Dead Sea and Qumran, as well as allowing free time for relaxation and private exploration. The Bishop of Connor has asked Canon Mann to lead the trip as he had been to the Holy Land on five previous occasions.  Further information on the pilgrimage, along with a booking form, will be available on this website shortly.

Before questions, Bishop Alan told clergy that he had taken time out to reflect on his own thoughts for the diocese. “I have been wrestling with one word which I keep taking apart. That word is ‘connections.’ I use it because I see so many disconnections in so many places.”

He went on: “One of my priorities is to increase the sense that we belong to one another and we have a critical role in our community in Northern Ireland to make connections with each other and with people’s lives.” The Bishop said he may hold a special synod to discuss how to go further with this.

Issues raised from the floor included queries related to swine flu vaccinations for clergy who visit hospitals, praise for the children’s ministry project which the Rev John Rutter (Glenavy) described as being of ‘the utmost importance,’ and comments from the Rev Paul Dundas (Christ Church, Lisburn) on the Growing Leaders programme. Bishop Alan urged clergy to encourage others towards ordination. “The numbers are fine at Theological College and the average age has lowered, but this is something I don’t want to drop. It was a curate who asked me if I had thought about ordination,” the Bishop said. “We talk about the stress of ministry but I still believe that being ordained is one of the greatest gifts and privileges. If we don’t challenge people how will they take it up? If I had not been challenged, then I might not be here now.” 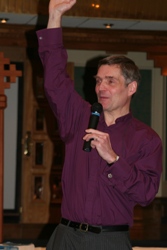 Bishop Alan also revealed the topic for his Lent course in 2010 would be Jesus, studied in a Trinitarian way. Of the annual courses, he said: “I enjoy them and they help me feel somehow I am fulfilling my ministry of teaching.”

Before close of the open session, the Dean of Connor, the Very Rev John Bond, expressed thanks to Bishop Alan. “We are a very large diocese and sometimes we think we know each other but it is only when we come to a conference like this that we get the opportunity to interact,” he said.

Evening worship on the second day took the form of a very atmospheric Taize service where candles and an abundance of beautiful music by Lorna, Canon Mann, and some volunteer singers brought the day to a very spiritual end.

The closing Eucharist on the Friday morning included a third address from Bishop Richard whose final talk on Getting to the Heart of the Matter was on the subject of ‘the response of our hearts.’ He stressed that any breadth we seek to give must be founded in the depth, quoting Paul ‘We should be rooted and grounded in love.’ Everyone knows when they are leaning to sin, he said, adding “God sees us in all our ways and it takes guts to acknowledge God even when you are doing wrong.”

Bishop Richard went on: “The healing hands of God require you to tell the truth about everything that is in your heart. Somewhere, there is the moment you are welcoming the Trinity back into your life.” 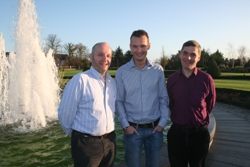 Before the final session with Mark Russell, the Rt Rev Ken Clarke, Bishop of Kilmore, Elphin and Ardagh, in whose diocese the Slieve Russell Hotel lies, called in with a very Irish welcome (coming at the close of the conference). He said he had fond memories of his 15 years as a rector in Coleraine in Connor Diocese, and paid tribute to Bishop Alan, describing him as having ‘a magnet in his heart and a compass in his head.’

Bishop Alan in turn thanked Lorna and Canon Mann for the music over the three days, and spoke of Peter McDowell’s ‘amazing gifts’ for putting liturgy together. He added: “It’s good to let him lose. I hope you have learned how creative liturgy is really quite easy to do and how easy simple singing is.” He also thanked the Ven Dr Stephen McBride, Archdeacon of Connor, for organising the conference, his secretary Rosemary Patterson [“an immense gift to me,”] and diocesan training co-ordinator Peter Hamill who helped put the programme together.

Of Bishop Richard, he said: “This man was just incredible. He brought us to a very holy place in a very gentle way.”  Presenting Bishop Richard with a gift, Archdeacon McBride said: “It has been like watching somebody weave a rich tapestry watching you fight and wrestle with some of these ideas which disturb you.” He went on: “You have reminded us of the need to go to the mountain top.”

Bishop Alan thanked Mark Russell for his most challenging addresses, and the Ven Stephen Forde, Archdeacon of Dalriada, presented him with a gift saying: “You have reminded us that we are to be a blessing, and that we cannot always see the benefit of what we do but someone else might.”

In his final session Mark asked the conference: “What did you start out to do? What was it that got you into this mess in the first place? What did Jesus whisper in your ear?” He reminded clergy that Jesus had never picked perfect people to be his disciples. “Be courageously naive and believe that God can do it.” Referring to how Jesus had washed his disciples’ feet he urged the conference, “Maybe you just need to sit and led God wash your feet.”