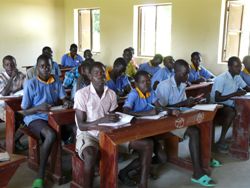 Mongo Primary School, built on the generosity and prayers of the people of Connor Diocese, will be complete this month.

The finishing touches are being added to the brand new primary school in this small village in Southern Sudan, Africa.  The school cost £113,000 which was entirely financed by the people of Connor.

In 2007 the Ven Stephen Forde, Archdeacon of Dalriada, established a formal link with the Diocese of Yei in Southern Sudan.  Since then, Connor Diocese has been fundraising to help Bishop Hilary of Yei meet one of his goals for the diocese – the construction of six new primary schools, one for each part of Yei Diocese.  Money raised in Ireland was channelled to Sudan through CMS Ireland, where the construction work was supervised by CMS Ireland affiliate, John Spens, on behalf of the Diocese of Yei.

John said the school was a wonderful achievement. “Every single penny given in Ireland found its way to Yei and has been spent on construction work. The end result is fantastic.  It will transform the educational experience of thousands of Sudanese children in Mongo,” John said. 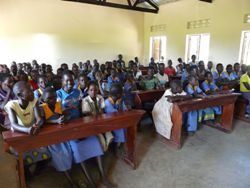 Construction began in February 2007 with the laying of a foundation stone in Mongo. Work then continued steadily as and when funds reached Sudan. In all, eight classrooms in three blocks have been built, together with offices for the Head Teacher and Deputy Head Teacher, a large staff room and store.  These classrooms replace an old block with a leaky room and some temporary classrooms made of mud and thatch, which could not be used when it rained.

In addition, with funding obtained by CMS Ireland from the Basic Services Fund, new latrines have been constructed and a borehole drilled so that the school has a good supply of clean drinking water. Ten teachers have been trained at a nearby teacher training college and in December members of the Mongo PTA will attend a training workshop.

Archdeacon Forde said:  “I am so proud of the people of Connor Diocese.  In less than two years, they have given more than £120,000.  I will be visiting the Diocese of Yei in January 2010 and am really looking forward to visiting the completed school at Mongo.”

The Deputy Headteacher of Mongo School. Ms Eva Lily Henry, has written to CMS expressing gratitude for the new school, which she said could not have been achieved after 25 years of civil war without the support of CMS.

In it she says the school has helped re-integrate displaced internal Sudanese as well as returnees. The sturdy construction means more pupils turn up more regularly during the rainy season and don’t have to be sent home because of leaks, pupils are able to learn in a healthy, safe environment, and they can now socialise freely with their local community. She also outlines the challenges that still lie ahead and asks for prayers that these might be overcome. The full contents of Ms Henry’s letter can be read here.

In July 2010 CMS Ireland will facilitate a visit to Mongo Archdeaconry in Yei Diocese. The Rt Rev Alan Abernethy, Bishop of Connor, will join the team from Connor Diocese visiting Mongo to officially open of Mongo Primary School as well as to help and support the Diocese of Yei in its ministry. Anyone in the Diocese of Connor who would be interested in joining this team is asked to contact David Gough at CMS Ireland for further details, email davidgough@cmsireland.org.