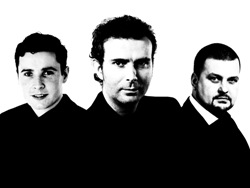 The world renowned Three Irish Tenors will be in concert in St Anne’s Cathedral, Belfast, on Friday December 4.

This is the first time in years the tenors, Dominic McGorian, Ciaran Nagle and Kenneth O’Regan will have been home in Ireland to celebrate the Christmas season.

Combining the release of their new CD – Christmas from Dublin (available on Amazon and iTunes) – the tenors will be performing throughout the country.

The three friends formed The Three Irish Tenors in 2000. They brought with them a wealth of diverse talents, energy, optimism and a sense of humour. Their aim: to sing songs and arias that would appeal to all generations, that could cross cultural and national boundaries and would be of superb quality. Together with their musical director, David Wray, The Three Irish Tenors have created programmes of their favorite songs and arias, not only from Ireland but also from a truly international repertoire.

Since their first performance in the Market Place Theatre, Armagh, this talented and exciting trio has performed to delighted, packed houses throughout Ireland, Europe, Asia, Africa, The United States of America and Canada. They have been awarded great honours by press, dignitaries, and the public at large.

Accolades include sharing the stage with Neil Diamond in the Phoenix Park Dublin in 2001, being invited to sing the American National Anthem in the Heinz Field for the Pittsburg Steelers for the Super Bowl playoff against the Chargers in 2003. More recently in 2008 the group received a certificate of recognition for their contribution to the arts from the Governor of Pennsylvania, and in 2009 were presented with the Keys to Jersey City by Mayor Jerramiah T Healy.

Just returned from their tenth American tour, the journey for this trio is proving to be not only a great success, but also a great joy. These three golden voiced tenors continue to captivate audiences with their infectious Irish charm.

The concert in St Anne’s gets underway at 8pm on December 4 and tickets are available from the Cathedral or at www.tickets.ie