Earl of Wessex attends service for soldiers returning from Afghanistan 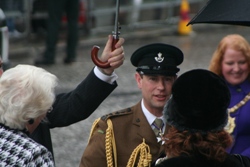 His Royal Highness Prince Edward, The Earl of Wessex, attended St Anne’s Cathedral on December 2 for an Act of Remembrance and Thanksgiving for regiments and units returning from active service in Afghanistan.

The interdenominational service was hosted by 19 Light Brigade which recently returned to its home base in Lisburn after its deployment on Operation Herrick in Helmand Province. Families of those who died in the conflict were among the 600 guests in the cathedral.

The Earl of Wessex represented Her Majesty the Queen. The Earl is Royal Colonel of 2nd Battalion, The Rifles. The Battalion is based at Ballykinler in County Down and is one of the main units in 19 Light Brigade. 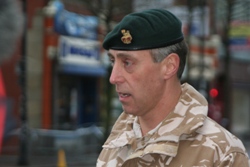 In an extremely moving service the names of all those on the Operation Herrick 10 Roll of Honour was read out by Brigadier Tim Radford OBE, Commander of the 19 Light Brigade. There were more than 80 names, and included the two soldiers murdered at Masareene Barracks, Antrim, on March 7 this year. Saper Cengiz Patrick Azimkar and Sapper Mark Quinsey were members of the 38 Engineer Regiment. 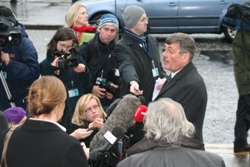 Army chaplains were among the clergy taking part in the service which was conducted by the Dean of Belfast, the Very Rev Dr Houston McKelvey, who also preached. Also present were the Bishop of Down & Dromore, the Rt Rev Harold Miller, and the Bishop of Connor the Rt Rev Alan Abernethy. Other guests included The Rt Hon Harriet Harman MP, Leader of the House of Commons and Lord Privy Seal; The Rt Hon Bob Ainsworth MP, Secretary of State for Defence; and Sir Jock Stirrup, Defence Staff Air Marshall. The Rt Hon Paul Goggins MP represented the Northern Ireland Office. 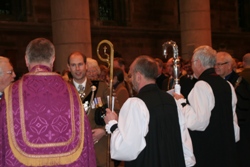 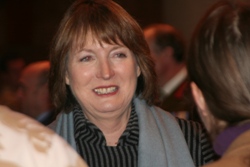