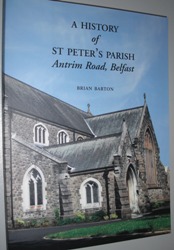 A book chronicling the history of St Peter’s Parish, Belfast, was launched in the church on Sunday November 22.

The publication, A History of St Peter's Parish by Dr Brian Barton, was launched by the Rev Charles McCollum, former rector of the parish of St Peter and St James.

At a special service of Choral Evensong , lessons were read by The Ven Dr Stephen McBride, Archdeacon of Connor, and the Right Rev Gordon McMullan, former Bishop of Down and Dromore.  Archdeacon McBride is another former rector of St Peter's, while Bishop McMullan has had an association with the Parish during his retirement.

The office was intoned by Jack Kinkead, a final year ordinand at the Church of Ireland Theological Institute who used to sing in the choir of St Peter's.

Following the service, a reception took place at which the Bishop of Connor, the Rt Rev Alan Abernethy, officially launched A History of St Peter's Parish.  The reception was also addressed by Dr Brian Barton, author, and the current rector of the Parish of St Peter and St James, the Rev Adrian Dorrian

Dr Barton, the son of a Methodist minister, was born in Dunkineely, Co Donegal, and educated at Methodist College, Belfast, Queen’s University, and the University of Ulster. 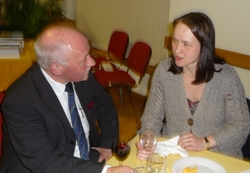 He tutors in history with the Open University and has written or edited 12 books on Irish history and politics.

A History of St Peter's Parish begins by setting the scene for the construction of the church in 1900 – outlining the growth of north Belfast, the benefaction of the 9th Earl of Shaftesbury, the involvement of some leading local entrepreneurial families, and the role of other founding members, including Francis Joseph Bigger.

The book then provides a detailed chronological account of the church’s development. Its early growth was climaxed by its substantial extension in 1933. Its later history was more difficult – a consequence of the trend towards falling church attendances by the 1960s, and the movement of parishioners out of the city which had begun by then.

In addition, the parish was directly affected by the ‘Troubles’  –  it was damaged by an IRA explosion close by on July 311987. Nonetheless it has survived, even flourished – as is evidenced by the completion of the McCollum Hall in 2008.

This book also provides a detailed history of the Chapel of the Resurrection, which was transferred to the Church of Ireland by the Earl of Shaftesbury in 1938, eventually de-consecrated in November 1986, and sold to private developers in May 1989.

A History of St Peter’s Parish is available in the Good Book Shop, Donegall Street, Belfast.