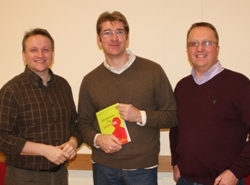 Two presentations by author and Church of England curate Mark Griffiths on the topic ‘How can the church connect with the unchurched child’ were well attended.

The ‘One Generation from Extinction’ talks took place in St Brigid’s Parish Church, Glengormley, on the evening of Monday December 7, and the following morning in St Peter’s Parish Centre, Antrim Road.

Both attracted around 25 people including clergy and youth leaders from Connor Diocese and beyond.

For the last five years Mark Griffiths, a curate in Slough, has been studying child evangelism in the United Kingdom, and this special training event was an opportunity for him to present some of the findings of that research. 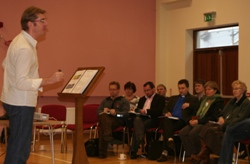 Mark was introduced by Alan Charter, Associate Director of Scripture Union based in Milton Keyes, England. Alan is touring with Mark promoting Mark’s new book ‘One Generation from Extinction’ on behalf of Children Matter, an organisation committee to introducing children to Jesus.

Both were welcomed by Connor diocesan training co-ordinator, who organised the two presentations. 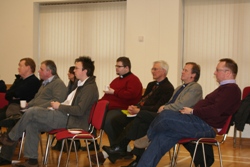