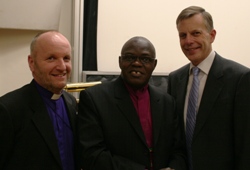 The Most Rev Dr John Sentamu, the Church of England’s second most senior figure, was the celebrated guest lecturer for this year’s prestigious Church of Ireland public lectures at Queen’s University on February 1 and 2.

The 2010 lectures were the largest since the inaugural lecture of 1957 attracting audiences of more than 200 on both evenings.

The Vice-Chancellor of Queen’s, Professor Peter Gregson, welcomed the Archbishop warmly on the first evening while on the second, the Bishop of Connor, the Rt Rev Alan Abernethy, was host, describing Dr Sentamu as someone with ‘the ability to think theologically and to behave pastorally.’ 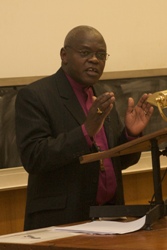 A charismatic figure, Archbishop Sentamu’s talks were characteristically lively and engaging, the first on the theme ‘Conflict and Reconciliation: A Theological Perspective’; the second entitled ‘A Ugandan Perspective on the Mission of the Church in Modern Britain.’

On conflict, his thesis was that conflict between human-beings is inevitable, but that rather than avoid it at all costs, the question is how to understand and handle it and reach a position of mediation. He argued that in cross-cultural conflict mediation must recognise the reality of views and values in cultural contexts and honour expectations from both sides. In terms of personal, inner conflict meanwhile, insecure in our own identity, we find love, acceptance and recognition of our worth only through a personal relationship with God.

The lecture moved onto the concept of post-conflict reconciliation, the step beyond forgiveness when both sides are willing to resume the risk of relating with each other again. Christ, he said, understood the risky business of mediation and reconciliation better than anyone, ready to give his life in order to reconcile us to God.

Drawing on personal experiences, not least on racism, the lecture concluded by developing his concepts through exploring a landscape of the worldview of the bible: Creation; corruption; reconciliation through Christ; and the promise of a New World.

He offered three important truths: the nature of God – one God, a Trinity in unity, a God of justice and mercy; men and women made in his image and likeness, of unique worth in his sight; and the Church as a community of reconciliation, love, justice and a foretaste of God’s eternal kingdom. He recalled the African maxim, ‘I am because I participate’, or, ‘a person is a person through other persons’. Ending on a culturally appropriate note, he quoted from Seamus Heaney’s poem ‘The Bridge’ – ‘steady under strain and strong through tension’.

The second lecture was equally captivating, at times humorous, at times pithy, delivered, he said, as ‘a child of the East African Revival’ but also shaped by the trauma of non-democratic regimes and the Aids epidemic. Modern Britain and Ireland, the archbishop suggested, knew well what not to believe but very few have a clue as to what to believe.

In calling on people to ‘put love where love isn’t’ he argued that Christ and his grace is all-sufficient; that Christians should ‘stand firm’, able to talk about Christ as freely as they talk about the weather; never to give up hope; and, amplified by exposition on the Beatitudes, to suffer for Christ. He concluded with the challenge to ‘together make Christ visible … letting his love be conspicuous and contagious through us.’

The Archbishop was also guest speaker at the Spires Conference Centre on Sunday January 31, where he kicked off the Evangelical Alliance’s Kingdom Conference.

During his four day visit he was a guest in the home of Bishop Abernethy and his wife Liz.