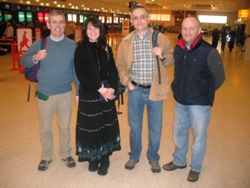 All detailed reports are now available of the Connor team's visit to our link diocese of Yei in Southern Sudan.

To go directly to these reports, which include photographs, scroll to the bottom of this page.

The team, which travelled to Sudan from January 17-27, was led by the Ven Stephen Forde, Archdeacon of Dalriada and chair of Connor Council for Mission, accompanied by diocesan accountant David Cromie and communications officer Karen Bushby.

The trip was facilitated by the Church Mission Society Ireland (CMSI) and the team is indebted to regional mission partner David Gough for his expert assistance and advice.

A highlight of the trip was a visit to the new primary school in Mongo village, 16 miles from Yei, which was built with £110,000 donated by parishes and individuals in Connor. 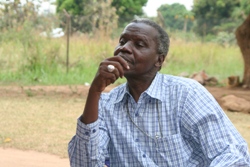 One of the aims of the trip was to lay the foundations for a Mission Experience Team Abroad (META) visit to Yei in July.  Assisted by the Bishop of Yei, Bishop Hilary Luate Adeba, Archdeacon Forde spoke to those on the ground, including NGOs, and determined the skills most needed when the July team arrives.

During their seven days in Yei, the team visited various projects run by Yei Diocese, as well as taking part in worship. They also had a private audience with the County Commissioner. 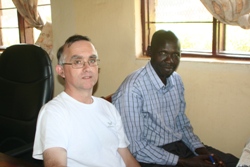 The civil war in Southern Sudan ended with the signing of a peace agreement in 2005, but with elections in April and a referendum next January, the future is uncertain. During the war, 1.9 million civilians lost their lives, and four million were forced to flee their homes.

Many people have now found their way home, and the population of Yei town has grown threefold to 150,000 in three years.  But they have come back to a devastated homeland with no infrastructure, limited education resources, no economy, and no investment. However, things are making life easier. There is now a regular electricity supply, the roads, poor though they are, have been widened, borehole water is plentiful, and there is even mobile phone reception. 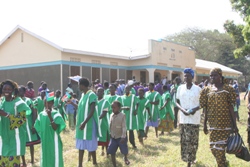 One of Bishop Hilary’s priorities was to build a school in each of Yei’s six archdeaconries. The first school to be built was Immanuel Model in Yei town. Here the results are the best in the County. Bishop Hilary is justly proud of its achievement. “This school is the best, the pupils are well disciplined and perform well.” he said.

Mongo Primary School aspires to be as good as Immanuel Model, but lacks trained teachers and essentials such as text books. This is something Connor Diocese will hope to address. In Mongo, the Connor team was greeted by hundreds of men, women and children in a breathtaking procession of colour, movement and music. 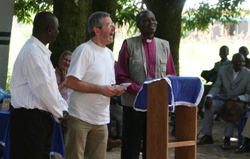 They were given a tour of the large, bright classrooms, before walking to the shade of the mango trees where the singing and dancing continued until the speeches began. Village elder Cypres Yata told the visitors: “We thank you for this was once our class and when the mangoes fell they fell on our children. We now wipe the tears from our eyes. The mangoes do not fall on our exercise books, the rain does not fall on us and there is no longer noise from outside.”

Archdeacon Forde brought Connor’s greetings to the children of Mongo. He recalled how he stood under the mango trees three years ago. “I had a dream. What if the people of Connor could build a school in Mongo. In the strength of the Lord the dream has come true,” he said. 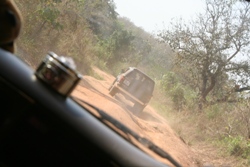 The drive to Mongo took 90 minutes. All the roads in Southern Sudan are red dust and full of huge ruts.  Because of this Yei is isolated. Local people cannot take their produce to markets so, despite the incredibly fertile soil there is no point in investing in any large-scale agriculture. Families grow what they need to survive, not what they need to thrive.

There are no doctors in Yei, yet the cost of air transport and the state of the roads means transfer to a hospital elsewhere is unrealistic for most people. Yei Hospital is in a poor state of repair. There are only 88 practicing doctors and 10 fully qualified midwives in the whole of Southern Sudan, a country of 10 million. The region has the highest 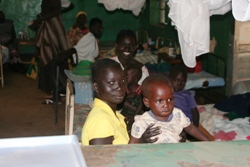 maternal mortality rate in the world.

In the dark children’s ward the beds are covered in mis-matched sheets and blankets and the paint peels from the walls. The operating theatre looks like a shed.  A trolley sits outside, dirty blankets on top, a cat cleaning itself below. In the maternity ward there are three mothers with new babies. But there is no-one qualified to do a caesarean section if a woman is in obstructive labour.

Bishop Hilary has vowed to put pressure on the County Commissioner to ensure that Yei Hospital is staffed by paid doctors. Fortunately, the nearby Martha Clinic, managed by CMSI associate Poppy Spens, runs an immunisation centre, consultation and treatment rooms in a modern, clean building.  Poppy is planning further expansion, including the conversion of an empty building into a children’s ward, eye clinic, and dental clinic. The Martha Clinic also runs a mobile clinic. 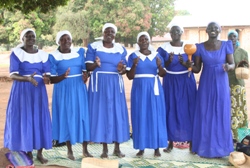 During the trip, Karen Bushby met with members of Yei’s 1,499-strong Mothers’ Union. Most are widows, and during the war many lived with their children in the bush. Others trekked for weeks in search of the relative safety of the camps for displaced people in the Congo, Uganda or Kenya.

Back home, the MU members earn a living as best they can. For most, this means cutting grass in the bush and selling it in Yei where it is used to roof tukuls.  One of the MU’s biggest projects is to run the new nursery school. The ladies do beautiful craftwork, but there is no local market for their products. 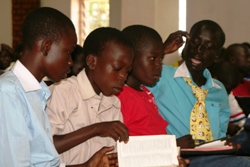 The Connor team called in at a P7 leavers’ conference in Yei Cathedral hosted by the Scripture Union of Southern Sudan. Among the speakers was CMS Ireland associate John Spens, who addressed the theme ‘Fear not, I am with you.’ Afterwards, John asked Archdeacon Stephen Forde to bless any child who wished Jesus to enter into their heart and more than 200 came forward.

Worship in Yei is a feast of song, dance and praise. More than 1,000 worshippers packed into the cathedral for the first English language service at 7.30am on Sunday January 24. Archdeacon Forde preached and later returned for the Bari language service. 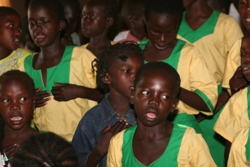 Just 300 metres from the cathedral is the more traditional straw-roofed Zamba Church which takes its name from the five tribes who worship here together – a unique situation. Here there was more singing and dancing as young and old gave themselves over to the joy of worship.

During the trip the Connor team also visited Yei Vocational Training College which offers practical training in skills including carpentry and joinery, electrical, plumbing, building and concrete technology, vehicle mechanics and driving. It also runs a micro-enterprise programme. At present the VTC has 90 full time students. Students who graduate return to their villages and pass their skills on to others.

Following the visit to Yei, Connor Diocese is planning ways of taking the partnership forward. The META team for July is currently being formed, but it is anticipated one of its tasks will be to lead a three day conference for pastors and youth workers in preaching, discipleship and evangelism. Applications from anyone interested in the Yei META must be submitted by February 25 and can be downloaded here or contact Archdeacon Stephen Forde on stephenforde@btinternet.com.

Click on the following headlines to read more detailed reports, with photographs, of the January trip to Yei. Reports and photography by DCO Karen Bushby.

Wars which have devastated Southern Sudan

Education is the future for the children of Yei

The price of love

A wonderful welcome at Mongo School

Hospital with 30 cleaners but no doctors

The bank with no money

The inspirational ladies of Yei MU

Martha Clinic is a lifeline for many

Sunday worship is an all singing, all dancing affair

Training the workers of the future

Getting around Southern Sudan

At home with John and Poppy Spens

So what was it really like? (incorporating the tale of the delayed suitcases)