A group of around 30 parishioners from St Peter and St James’ Parish, Belfast, were guests at the Belfast Synagogue in Somerton Road on Wednesday February 17.

An invitation had been extended by the local Jewish community, and a guided tour of the Synagogue was followed by lunch and a session of story telling. 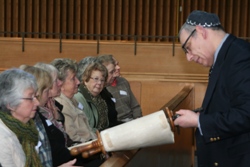 Guides Neville Finch and Edwin Coppel gave a fascinating insight into Judaism in Ireland, dating back to 1079, and some of the characters who have shaped the history of Jews in Belfast, not least Otto Jaffe, Lord Mayor of Belfast and life President of the Belfast Hebrew Congregation. Neville revealed that the first recorded Jewish service in Belfast took place in Otto’s brother’s home in 1864.  It was Sir Otto who founded the previous synagogue at Annesley Street, off Carlisle Circus.

The group heard that during the Holocaust the Jewish Community in Northern Ireland had established a farm at Millisle and between 1939 and 1948 300 children passed through the farm. “There were one million children murdered during the Holocaust because of their beliefs so this may seem like a small number,”  said Neville, “ but at least the community was able to look after them and many went on to do great things.” 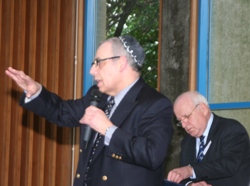 He spoke about the golden years when there would have been 1,500 worshipping in the synagogue, but numbers have since declined to around 56-60 active members. “We are able to look back to an illustrious past and we hope that that will be reflected in our future,” he told the St Peter’s visitors.

Edwin spoke about the various daily and Sabbath services which take place in the Synagogue, and gave some background to the different Jewish festivals. There was a daily prayer book and the Rabbi reads from the Torah, the five Books of Moses. These Books are kept in the Arc, the holiest part of the Synagogue, and are handwritten in Hebrew on scrolls on spools. The Books were carefully passed around so the visitors could have a close look. 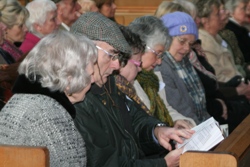 Edwin also related the various dietary laws which Jews have to adhere to. “They are a form of moral self-discipline, and are hygiene and health related. They are defined in the five Books of Moses,” he explained.

The group also heard about the Jewish calendar, worked out on the lunar calendar, giving seven leap years every 19 years (there is an extra month in every leap year, which a normal year is 12 months).  During services, ladies are asked to sit behind the men –  it is orthodox tradition that men should be separated from women in the synagogue. But Neville stressed that this was because the women may distract the men. “Ladies do play an important role in Jewish tradition,” he emphasised.

The St Peter’s party were joined for the talk, lunch and entertainment by members of the synagogue who meet for fellowship every second Wednesday.

The rector of St Peter and St James, the Rev Adrian Dorrian, thanked the Synagogue for the kind invitation and for the fascinating talk.