Charity pedal-push will link all churches in Connor 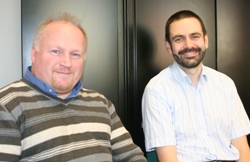 Parishes across Connor Diocese are being asked to support a very unique fundraising drive – or should we say fundraising pedal!

On June 1, the Bishop of Connor, the Rev Bill Boyce, rector of St Brigid’s, Mallusk, his curate the Rev Andrew Ker, and St Brigid’s parishioner Sam Cunningham will set out on a 346 mile cycle visiting every parish in the diocese over six days.

As well as linking all parishes in Connor, the cycle will also be a moving tribute to Bill’s late wife Sandra, who was just 56 when she died from cancer last year, and a way of raising funds for the Friends of the Cancer Centre at Belfast City Hospital. 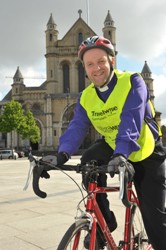 The cyclists will begin their ‘Tour de Connor’ at St Brigid’s on Tuesday June 1. They will finish at St Brigid’s on June 6, the first anniversary of Sandra’s death, when a special service will be held at which a Book of Remembrance will be dedicated. This book will be collated along the cycle route, with parishioners throughout Connor invited to enter the names of family members who have died of cancer.

Parishes will be asked to present their list of remembrance to the cyclists when they call at each church en route.

The cyclists anticipate arriving at St Brigid’s at 3.30pm on Sunday June 6 and the Service of Thanksgiving and Remembrance will begin at 4pm with the Archbishop of Armagh, the Most Rev Alan Harper, preaching.

A keen cyclist, Andrew had had a route in mind for some time, but it was Bill’s wish to do something to remember Sandra, and to thank the Cancer Centre, that turned an aspiration into a reality.

Andrew said: “I have wanted to do something for some time that involved the whole diocese, something to encourage people to get to know their neighbouring churches, and a cycle seemed the most practical way to do it.” 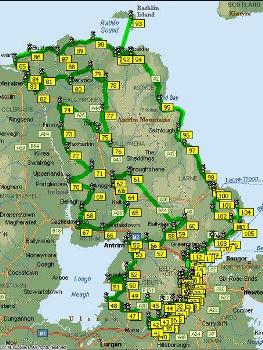 Bill added: “It was the care and compassion of the people in the Cancer Centre that spoke to me. They were very dedicated people and they need funding so I wanted to do something for them. I was just chatting to Andrew and this all fell into place.

“I see the Tour de Connor as having a dual purpose. It is a diocese-wide venture, but is also a way of helping people who have to deal with cancer,” he said.

Andrew said the lists of remembrance were also a way of marking the stops each church. “We will be asking each church to present us with a list of names on the church’s headed paper of those who are remembered in that church as having died of cancer.

“These lists would then be built into a Book of Remembrance, and when we get back to St Brigid’s we will present the Book and hold a diocesan Service of Remembrance which will bring everybody in the diocese together. This is not just Bill’s journey or our journey, but everybody’s,” he said.

Bishop Alan, Bill, Andrew and Sam are looking for sponsorship for their Tour de Connor – they have set a target of £20,000 – and would like to see parishes add names to the Book of Remembrance. A schedule of the proposed route (which may be subject to minor changes) can be downloaded here.

Sponsorship can be given directly online via www.justgiving.com/Bill-Boyce.