Successful Service of Rehallowing at Dunluce 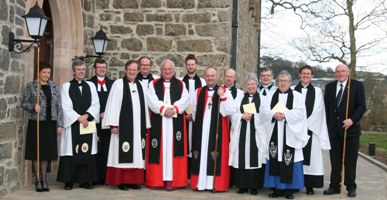 Former Church of Ireland Primate Lord Eames paid tribute to the rector and select vestry of Dunluce Parish Church during a Service of Rehallowing on Sunday March 21.

Lord Eames was guest preacher at the service where the Bishop of Connor, the Rt Rev Alan Abernethy, was petitioned by rector’s churchwarden Mrs Allyson Hutton, to bless the major restoration work that had been carried out in the church of St John the Baptist.

Lord Eames said the successful renovations were a reminder that the church stood not only as a symbol of our witness, but also of God’s call to us and what that means in our daily lives. 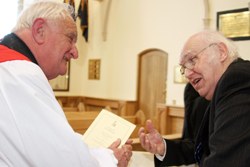 The Service of Rehallowing was the culmination of nine months of extensive restoration work to the church, which dates back to 1821. The church was built on the site of the old mid 13th century church of Portcammon, and the church at Dunluce Castle was closed in 1821 giving its title to the new parish church of St John the Baptist.

A sanctuary was added in the 1890s, but the rector, the Rev Canon George Graham, said this latest refurbishment was the most comprehensive in the church’s history. It involved re-pointing of stonework, the removal and replacement of floors, wall plaster, pews and wainscoting. The church needed a new roof, and an extension was added to rear to accommodate a choir room and disabled toilets. 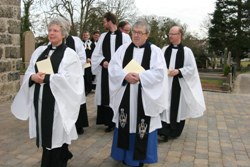 The church was completely re-wired, and a PA and audio visual system installed, along with a new heating system. The old organ, now in Armoy Church, was removed and replaced with a new Copeman Hart organ, stained glass windows were refurbished, and the font and pulpit were re-located. Outside drainage was improved and new paths were laid.

During the restoration work, services were held in the Chancellor Guy Hall of the Dunluce Parish Centre.

At the Service of Rehallowing the Bishop of Connor was also petitioned by peoples’ churchwarden Mr James Fulton to dedicate gifts donated by parishioners.

The Archdeacon of Dalriada, the Ven Stephen Forde, lead the Prayers, while Lessons were read by Stephen Chapman and Anne Gault, and the service was conducted by Canon Graham.

The rector said the project had restored a ‘very beautiful’ church to its former glory.  “It was in need of extensive repair and thankfully we were able to do it in a way that honours those who first built the church,” he said.

Canon Graham expressed gratitude to the architect, contractors and all concerned with the project.