Training Council Executive and Working Group members get together

Members of the Executive Committee of Connor Diocesan Training Council and all its working groups came together for a meeting and lunch at Church of Ireland House on April 13. 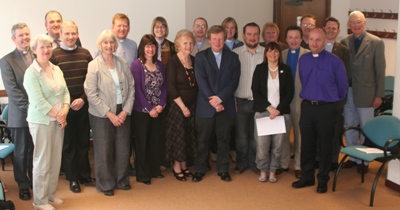 The newly constituted Training Council came into being on January 1 2009, and set up a number of working groups. These are project focused and some will be of limited duration. The groups are focusing on the three areas of Growth, Unity and Service.

Following lunch hosted by the Bishop of Connor, the Rt Rev Alan Abernethy, the Rev Paul Dundas, chairperson, welcomed  everyone, saying that the good attendance was an indication of the commitment of all member s of the Executive and the working groups.

“Some of the working groups are very new and at an embryonic stage and others have been going for some time,” he said.

Miss Mavis Gibbons, Lambeg Parish, gave an update on Commissioned Ministers, explaining that the scheme was under review following a resolution at last year’s Diocesan Synod.  She said the group had held a promotion meeting for clergy last autumn and had been encouraged by the interest shown. Since then one parish has commissioned eight people into various roles. The group had also hosted two focus evenings for Commissioned Ministers and is planning another event for June.

Chairperson Paul Dundas reported on the Growing Leaders working group. He said a pilot programme was running in Christ Church, Lisburn, using the Growing Leaders programme developed by the Church Pastoral Aid Society. This involves monthly meetings and a mentoring support programme. A training day on leadership in the church was planned for April 16, but had to be cancelled due to flight disruption.

The meeting heard that the Inter-church working group had presented an overview document to the Training Council Executive and was currently working on a policy in this area.

It was reported that the Rev Arlene Moore , Monkstown, had agreed to be a member of the Executive and would sit on the working group for Fresh Expressions, which is currently getting off the ground.

Bishop Alan reported on behalf of the Diocese Within working group. He said a special synod looking at the direction in which the diocese was headed would take place in 2011. He also revealed he hopes to run a 12 week lent course on the topic of Connections next year.  Rural Deans are nearing the end of work on a paper defining their role, and clergy will go on retreat in June this year. The Bishop also made reference to the planned diocesan trip to the Holy Land in March 2011.

Diocesan Training Co-ordinator Peter Hamill spoke about pastoral care courses, saying they had been very successful and the course would be available to anyone who requests it.

The Rev Jennifer Bell outlined work in relation to hospital lay chaplaincy. This year training has again been provided in partnership with the Northern Ireland Healthcare Chaplains Association. Six of the 14 who attended the course were Church of Ireland, but she said the diocese has no contact with them once their training was complete.

Miss Bell added that a letter had been sent to all hospital chaplains in the diocese to see if there was a desire to extend the lay hospital visiting support scheme. Once replies were received a decision will be taken on how best to progress the scheme. Thanks were extended to Mrs Eileen McKeag, Malone, for all her help with the scheme over the years.

The Rev John McClure reported on the work of the Social Issues group. He expressed disappointment that there had been such a poor response to the course on suicide which had to be cancelled in March, but said it was hoped to reschedule the course.

Mrs Paula Wright, Lisburn Cathedral, reported that Christians Against Poverty (CAP) was looking into setting up two centres in Connor Diocese, one in York Road, Belfast, and one in Hillhall. She said she was hopeful funding would be available for this initiative, and added that member s of the project group would be travelling to Bradford, England, for training and would also be visiting a CAP Centre in Magheralin to see how it was set up and run.

Mrs Wright said the group was also looking at children’s issues, including the impact of the recession on children in Northern Ireland. “The figures for hunger among children in Northern Ireland are scary,” she said. John McClure told the meeting that 36,000 children are living in poverty in the province. The ‘tremendous work’ the Mothers’ Union has been doing with families was acknowledged by the Council.

In his report Training Co-ordinator Peter Hamill said a lot of exciting things had come out of the research into children’s ministry in the diocese, but that the report was still being put together.

Members of the Training Council Executive and working groups are as follows: