Introduction of new chaplain at the Church of Ireland Student Centre 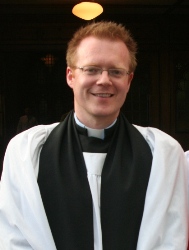 The introduction of the Rev Barry Forde as chaplain of the Church of Ireland Student Centre will take place in The Church of The Resurrection on May 4.

Rev Forde will be introduced by by the Bishop of Connor, the Rt Rev Alan Abernethy during a service in the Elmwood Avenue church beginning at 8pm. This will be followed by a reception in the Oasis Cafe.

In order to take up his role as Church of Ireland Chaplain and Dean of Residences at Queen’s University, Barry and his family will move from Coleraine where he has been curate in St Patrick’s and St Andrew’s for the past two and a half years.

Barry, 35, trained and worked in law before his ordination. He is married to Claire and they have three children, Catherine, 8, Sophie, 5, and baby Michael, born last November.

The new chaplain studied law at Dundee University before training to be a barrister in the Legal Institute, part of Queen’s University, for a year.  He practised law for three years before working for a financial services company.

He studied Theology at Trinity College Dublin and at the Church of Ireland Theological Institute. He was ordained a Deacon at Christ Church Cathedral, Lisburn, on June 24 2007, and was ordained a priest in St James’ Church, Belfast, on June 9 2008.

Looking forward to his chaplaincy, Barry said: “It is a tremendous opportunity to be an influence on many young lives at a pivotal time, young people who will go on to shape church and culture for many years to come.”

His said he viewed his new role as a privilege. “It will be very exciting and very challenging with lots of hard work to be done, but there will also be a lot of opportunities.”

These include working with other chaplaincies within the university – Barry is already part of the Church of Ireland Methodist Covenant Council.

Barry succeeds the Rev Patrick McGlinchey who left the Queen’s Chaplaincy to become Director of Missiology at the Church of Ireland Theological College.