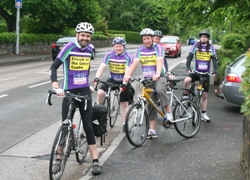 The Tour de Connor cycle marathon is underway, with the core group of three and a couple of pedalling pals scheduled to stop at 40 churches in the course of 40 miles on their first day.

The six day cycle, which will cover 346 miles from June 1-6, will raise funds for charity and remember those who have died of cancer. Undertaking this mega challenge are the Rev Bill Boyce, rector of St Brigid’s, Mallusk; his curate, the Rev Andrew Ker, and parishioner Sam Cunningham.

They pushed off from St Brigid’s at 8.55am on Tuesday morning, waved on their way by parishioners and friends. The cyclists plan to stop at every single Church of Ireland parish where they will collect a list of names compiled by parishioners in memory of loved ones who have died of cancer. 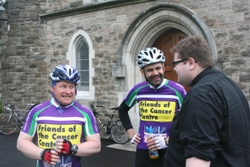 They will also be collecting sponsorship and hope to raise £20,000 the local Friends of the Cancer Centre charity.

For Bill the sponsored cycle will be emotionally as well as physically demanding, for the event has been organised in remembrance of his wife Sandra, who was just 56 when she died from cancer last year.

The ‘Tour de Connor’ will finish at St Brigid’s on Sunday June 6, the first anniversary of Sandra’s death, when the Book of Remembrance, made up of the lists collected at each parish church, will be dedicated at a Service of Thanksgiving and Remembrance starting at 4pm in St Brigid’s. The preacher will be the Archbishop of Armagh, the Most Rev Alan Harper. 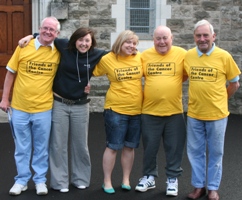 The cyclists are supported by a dedicated team who will roll up in advance of the group at every stop equipped with snacks, drinks and if necessary medical supplies. Spirits were high on day one, the sun was shining, and it looks like this Connor-wide venture will prove a great success.

During their lunch stop at St Anne's Cathedral, Belfast, they also received the support of actor Tim McGarry, a member of the Hole in the Wall gang, well known for his role as Da in Give Me Head Peace.. Tim, a friend of a tour support team member, joined in a photocall outside the Cathedral,

You can follow the team’s progress on their blogspot at http://tourdeconnor.blogspot.com/ 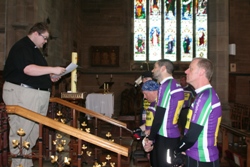