The fantastic cyclists who completed the Tour de Connor on June 6 have said a big thank you to the people of Connor Diocese who helped them raise a massive £35,100 for the Friends of the Cancer Centre.

The Rev Bill Boyce, rector of St Brigid’s, Mallusk; his curate, the Rev Andrew Ker, and parishioner Sam Cunningham cycled 351 miles over six days, calling at every single church in the Diocese of Connor.

They were accompanied on the road by a hardworking and dedicated support team, and were joined by other cyclists at different stages.

As well as raising money for the Friends of the Cancer Centre, the cycle was also a tribute to Bill’s wife Sandra, who died on June 6 last year after her own battle with cancer, and a way of remembering other loved ones. At every stop the cyclists picked up a List of Remembrance containing the names of those cancer victims remembered in each parish. The end result was a Book of Remembrance containing literally hundreds of names which was dedicated by the Archbishop of Armagh at a Service of Remembrance and Thanksgiving in St Brigid’s on June 6. 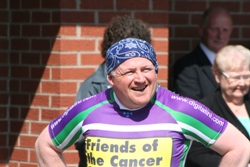 It was fitting that this service was held on the first anniversary of Sandra’s death, and it was an emotional occasion for Bill and Sandra’s family, and the many, many parishioners and friends who attended.

Speaking before the service, Archbishop Alan Harper, who gave the address, said: “I cannot think of a more positive and creative response to something as tragic as losing your spouse than to put all of your energies into fighting the disease that took her and great credit to Bill and all taking part in the Tour de Connor, and to the people of Mallusk who have supported their rector so generously, especially in this last difficult year. It is a great privilege to be here.” 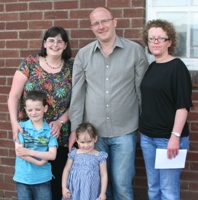 Sandra’s daughter Tracey McCandless, said she was very proud of the achievement of Bill and his team. “It is great because the cancer centre was where my mother spent her last week and the work that goes on there is phenomenal. The guys did a great job. Mum would have loved it.” Sandra’s son Ian McCandless was also at the service along with his wife Annabel and their children Mark, 6, and Katie, 3.

Gordon McKeown, Chairman of the Friends of the Cancer Centre, said the money raised by the Tour de Connor team had been ‘absolutely fantastic.’ “In the current times and with the state of the health service and the fact that budgets have been cut this money has great significance,” he said. “£35,000 will be used directly for the care of cancer patients in Northern Ireland. The team has done a fantastic job.”

The Rev Andrew Ker, who was the brains behind the route and the finely tuned schedule, said it had been a ‘spectacular’ week. “It was wonderful. The miles disappeared under our wheels. Each morning it was tough going for an hour or so and then we just settled into our rhythm and got on with it.” 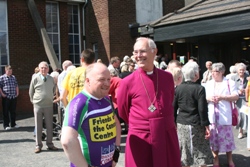 Sam Cunningham said the challenge had been fantastic. “The thing that stands out for me was the friendliness and the generosity of the people we met along the way. Some of the donations were amazing,” he said.

Bill also described his week as ‘fantastic.’ “All the churches changed and the accents changed but the people did not. They were all the same in their welcome and generosity. I feel elated to finish today. I am exhausted, but the adrenalin has kicked in. I think Sandra would be proud of our achievement.”

Cheryl Armstrong was one of the team who supported the cyclists over the six days providing food, drinks, moral support, and, in Cheryl’s case, medical attention if needed. Fortunately there was only one scrape when Bill ran into Andrew’s bike on day one, resulting in a fall and a grazed elbow. 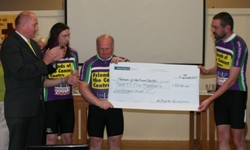 Cheryl said: “The fellowship was great. I enjoyed going to each church, meeting the people there and seeing such kindness. It was evident that cancer really does affect everybody. The money raised shows that people are willing to give to a good cause.”

During an emotional service in St Brigid’s, the Rev Peter McDowell interviewed Bill about inspiration behind the cycle and the event itself. Bill told the congregation: “The people of Connor Diocese are wonderful. We are just so bowled over by their friendliness, generosity of spirit and financial generosity.” 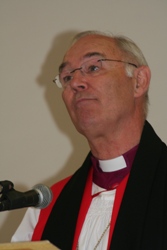 Bill, Andrew, Sam and the team presented a cheque for £35,100 to Mr McKeown. This figure vastly exceeds the original target of £20,000 – and more money is still coming in.

Archbishop Harper based his address on the reading from Joshua 5:13-6:20, the capture of Jericho. He told the cyclists: “It is wonderful that you have visited every church in the Diocese of Connor and galvanised this, one of the biggest dioceses in the Church of Ireland, into a piece of work which is about supporting those most in need of physical, emotional and spiritual support. I salute you.”

The Archbishop said this was not only a service of remembrance and thanksgiving, but also of hope. Likening the walls of Jericho to the disease that is cancer, he said no experiment was ever wasted, even a blind alley will rule out what would be ineffectual. “The only failure is not to try,” he said.

During the service the congregation also watched a photo presentation which really brought home the distances the cyclists and support team had travelled, the variety of churches they visited, and the fellowship they enjoyed. 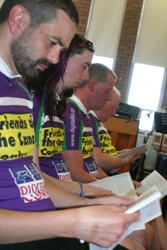 It was an emotional afternoon, particularly as Andrew stood up to thank all those who had made the vision become a reality. He spoke of Bishop Alan, who had been an enthusiastic team member until he had to pull out because of illness. “It was with his support this became the event it has,” said Andrew.

Visit the Photo Gallery (left hand of the page) for more pictures. 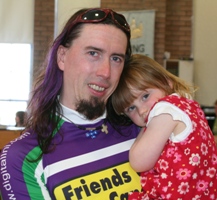 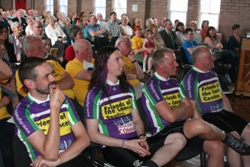