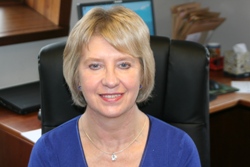 June Butler, secretary to the dioceses of Connor and Down & Dromore, has been awarded an MBE in the Queen’s Birthday Honours List.

June, who joined diocesan administration as secretary this year, was previously Assistant Chief Electoral Officer for Northern Ireland, and was awarded her honour for ‘services to electoral services’ in the province.

She said she was very honoured that years of hard work had been recognised in this way. “I feel very privileged to be awarded an MBE. I worked for the Electoral Office of Northern Ireland for more than 22 years, nine of those as Assistant Chief Electoral Officer and during that time managed over 20 elections and was also responsible for introducing individual elector registration to Northern Ireland, which was a first for the UK.”

June added: “None of my work could have been successfully achieved without the support, encouragement and determination of the team of staff at the Electoral Office and this award is a reflection on their dedication to electoral services.”

June, 58, grew up near Donaghadee. She studied English at the New University of Ulster at Coleraine, and her first job was with the Ministry of Agriculture.  A year later she moved to the new Northern Ireland Housing Executive and then onto the Northern Ireland Training Executive.

She later joined the Northern Council for Education and Research (NIGER), based at Queen’s University, Belfast and shortly afterwards married Kevin. They have three daughters.

During her 11 years at Queen’s June was NICER company secretary and also Secretary of the Northern Ireland Advisory Committee on Teacher Education.  In 1987 she was appointed to a senior post with the Electoral Office for Northern Ireland and was Deputy Electoral Officer and Deputy Returning Officer for South and East Antrim until 1994 when a major reshuffle saw her move to undertake these roles in the four Belfast constituencies.

In 2001 June was appointed Assistant Chief Electoral Officer for Northern Ireland and oversaw the introduction of individual registration for voting – the first area in the UK to do so.

In 2008 she was seconded to the Greater London Authority as project manager for electronic counting during the 2008 mayoral election. June’s last big election was the European Elections in June 2009. For the first time the verification of votes and count for the whole of Northern Ireland took place in the King’s Hall, with a media team shadowing June’s every move for a BBC documentary.

June lives in Saintfield and is an active member of Saintfield Parish, where she has been involved in the Mothers’ Union, at branch and diocesan level, for 18 years.