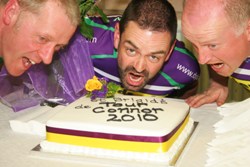 The Tour de Connor cycle marathon, which called at every church in the Diocese of Connor during the first week in June, has now raised £40,000 – double its original target!

This money goes directly to the Friends of the Cancer Centre, which helps cancer sufferers and their families at a time when life, and death, is very difficult.

People like Sandra Boyce, late wife of the Rev Bill Boyce, rector of St Brigid’s, Mallusk. Sandra and Bill received great support from the Friends of the Cancer Centre before Sandra’s death from cancer on June 6 last year, and the Tour de Connor was Bill’s way of saying thank you to the charity and of paying tribute to Sandra.

Bill, his curate, the Rev Andrew Ker, and St Brigid’s parishioner Sam Cunningham cycled 351 miles around the diocese over six days, starting at St Brigid’s on Tuesday June 1 and finishing back at St Brigid’s on Sunday June 6, the anniversary of Sandra’s death. 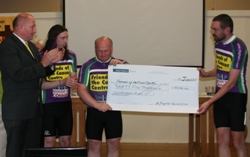 En route they collected money for the Friends of the Cancer Centre, with wonderful donations being made by parishes en route, and they also collected a list of names of people remembered by each parish who had lost their battle with cancer.

These lists were compiled into a Book of Remembrance, which was dedicated by the Archbishop of Armagh, the Most Rev Alan Harper, at a Service of Thanksgiving and Remembrance in St Brigid’s at the end of the cycle ride.

In a letter to parishes, Andrew reveals that the £39,000 is the biggest single fundraising event ever for the Friends of the Cancer Centre, and attributes its success to the support of the people of Connor. He extends a particular thank you to the parishes who offered the cyclists hospitality in the form of lunches, dinners and overnight accommodation.

And the people they met and the stories they heard en route means the Tour de Connor’s legacy will remain not only in the work of the Friends of the Cancer Centre, or in the Book of Remembrance, but in a new memoir the team hopes to compile. Andrew and Bill are inviting anyone who would like to write a reflection of the tour, the Book of Remembrance or their own personal cancer loss for possible inclusion in a record of the Tour de Connor.

“These reflections will be compiled into a fitting memoir of the tour and will hopefully record for posterity what was a truly remarkable event which achieved infirnitely more than we ever imagined it would,” Andrew writes.