Countdown to Connor’s META to Yei 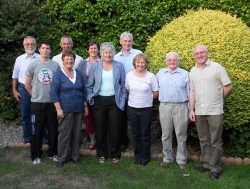 With only days to go before their departure for Connor’s link diocese of Yei in Southern Sudan, the 10-strong Connor Mission Experience Team Abroad (META) is preparing for a busy trip.

One of the team leaders, the Ven Stephen Forde, Archdeacon of Dalriada and rector of Larne, will leave for Africa on Sunday July 4 with his wife Fiona. The remainder of the team, with the joint team leader Canon Cecil Wilson, will begin their journey on Tuesday July 6.

Among the team’s many tasks will be the official opening of Mongo Primary School, built with donations from the people of Connor after being identified by Agherton Parish, Portstewart, as a partnership project, and the facilitation of a two-day conference for local clergy in preaching, evangelism and discipleship.

The Forde’s early arrival will allow Fiona to spend more time with CMS Ireland associate Poppy Spens in the newly built children’s ward at the Martha Clinic, where Fiona intends to work during her stay. Poppy runs the clinic, and she and her husband John are due to return to England for a break mid-way through the Connor team visit.

Archdeacon Forde is chairman of Connor Council for Mission and has visited Yei on two occasions in the past, most recently with a small team in January when he laid the foundations for this META. As former CMSI Director, Canon Wilson has also been a frequent visitor to African countries, including Yei. CMSI is facilitating the META. 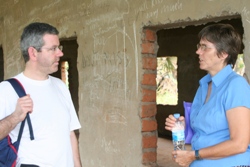 Looking forward to the trip, Archdeacon Forde said: “It’s with a mixture of excitement and apprehension that I return to Yei for the second time this year.

“This time it will be the rainy season, so there is the possibility that we will get stuck in the mud on our journey to Mongo. However  David, one of our team members, comes with off road driving experience, and will be swapping his Northern Ireland driving licence for a Sudanese one for the week.”

The Archdeacon went on: “There is also the responsibility which the clergy members of the team will have in sharing the Training Conference with the Yei clergy. Surely they will have as much to teach us about discipleship and evangelism as we will them? However, it will be exciting to introduce seven members of the Connor team to Yei for the first time, and to see the Yei Connor Link broadened, with the hope for further parish visits in the coming years.”

Southern Sudan is a country emerging from decades of civil war. The second civil war, which lasted 23 years and ended with the signing of the Comprehensive Peace Agreement in 2005, left 1.9 million dead, while four million had to flee their homes.  These displaced people have been returned to find the entire infrastructure, including health services, education and roads, devastated. Rebuilding Southern Sudan is now underway. Elections passed off peacefully in April this year, but with a referendum on the futures of south and north Sudan due to take place in January next year, the future is still far from certain.

One of the key tasks for the META team will be the official opening of Mongo School on Saturday July 10. Unfortunately as a result of recent surgery, the Bishop of Connor, the Rt Rev Alan Abernethy, will not be able to travel to Sudan with the team to perform this duty, but Canon Wilson and Archdeacon Forde will stand in. 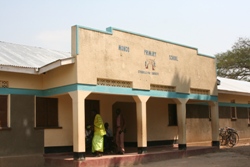 Mongo Primary School was built by parishes and individuals in Connor Diocese who donated more than £110,000. They were inspired to do so by Archdeacon Forde, who launched the Yei School Project at Diocesan Synod in 2007, telling delegates that education was one of the priorities of Bishop Hilary of Yei. Bishop Hilary himself visited Connor in March 2007 and again in March 2008 and his visits to parishes where he reflected on life in his home diocese gave added impetus to the fundraising efforts.

The school, in the rural village of Mongo, 16 miles from Yei along a rutted dust road, was completed last year, and the Connor team which travelled to Yei in January received a rapturous welcome when they stopped by for a visit.

On Sunday July 11 the team members will be joining worship in the Cathedral and in local parishes in Yei with clergy preaching at services in the Cathedral, St Paul’s in Yei, and Longamere village, three quarters of an hour away. Some of the services will be in Bari, the local language, and the Connor clergy will have the experience of listening to the words of their sermons translated for the congregation.

The two-day conference for Yei clergy, to be delivered by the visiting Connor clergy, on preaching, evangelism and discipleship, is another key focus of the trip.  The Connor guests plan to deliver two sessions on each topic over the two days and 30 Yei clergy will be in attendance. The sessions will include time for group discussion and for feedback from the Yei pastors. Preaching, evangelism and discipleship were identified by Bishop Hilary as areas where input from the Connor team would be most valued.

With clergy busy at the conference it is hoped Norma, Ben and Judith will spend these days working in local schools and at the Yei Teacher Training College, while Barbara and also Judith will be involved in counselling and support work with local women’s groups including the Mothers’ Union which is very strong in Yei.

David Henderson, the man brave enough to rise to the challenge of driving on Yei’s roads, will be working in the Yei Vocational Training Centre, run by the Episcopal Church of Sudan (ECS), and located in Old Mission Road, close to the Cathedral and the ECS Guesthouse.

Looking forward to the trip, Canon Wilson said: “Our objective as a team is to lay the foundations for a deep, long-term relationship between Yei and Connor. We can only physically achieve so much in a week, but the relationship will be strengthened and built upon through the clergy conference , the opening of Mongo school and the other activities the team will be involved in.

He added: “On a personal level it has been five years since I was last in Yei and I am looking forward to seeing all the development that has gone on there. From what I have been told I will not recognise it!”

The team will be back in Belfast on Friday July 16.