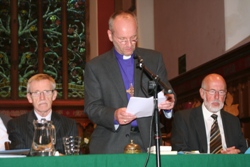 Clergy and lay people from across Connor Diocese were in St Patrick’s Parish Church, Ballymena, on Thursday September 9 for the annual Synod.

In his Presidential Address, the Rt Rev Alan Abernethy said the church must develop a new sense of direction. “Churches used to be the centre of social life and even providers of education, but increasingly we are marginalised and indeed ridiculed,” he said.

“We have become more disconnected from local communities and thereby at times become inward looking and intent on arguing over the meaning of religious words.” 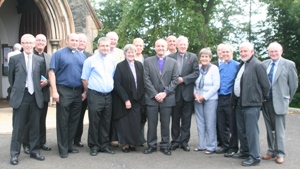 He reflected on the many ‘disconnections’ in society – family breakdown, lack of education and job opportunities, a disinclination to vote – and a disconnection from church and from God.

“As I read the gospels over and over again I am increasingly struck by the critical importance of INCARNATION – The Lord Pitched His Tent Among us – God became human and experienced the joy and pain of our humanity.  By doing so He affirms us but gives us a picture of how we are to be church,” Bishop Abernethy said. 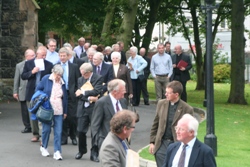 He went on: “I want to encourage us all to find ways of being the real presence of Jesus in our communities.  Not to see people as potential pew fillers but as broken, hurting people like ourselves that Jesus wants us to find ways of connecting with to bring them His healing presence.”

Bishop Abernethy outlined ways he hoped would help the diocese increase connections with the local communities.

A document will be sent to select vestries over the next year, and beginning in January he plans to visit the nine Rural Deaneries to discuss the issues locally. “I will want to challenge every parish to find at least one new way of connecting with the local community and its needs,” he said. 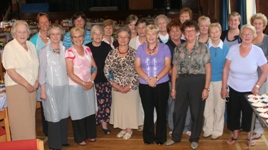 Another three evenings will follow the pattern of the Bishop’s Lent Courses of previous years and will be held in each of Connor’s three archdeaconries.

“This is a challenge for all of us but we must not think about survival, we must find ways of looking to the future with vision and hope.  We need to move from maintenance to mission,” Bishop Abernethy stated.

In his address he spoke of his recent surgery and recuperation, thanking those who had cared for him, and those who had ensured everything in the diocese 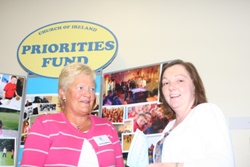 He also expressed gratitude to those who had visited Connor’s link diocese of Yei in Southern Sudan during the year, and congratulated all those clergy celebrating anniversaries, as well as the Rev Bill Boyce, rector of St Brigid’s, Mallusk, and his fellow cyclists whose Tour de Connor ride raised almost £48,000 for the Friends of the Cancer Centre. A special thanks was extended to Mrs Desney Cromey who is retiring after 22 years working with Pastoral Support for Clergy and Continuing Education in Ministry. 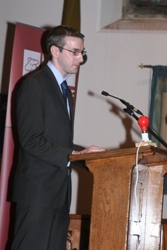 The reports of Diocesan Council and all boards and committees were passed, and in a Powerpoint  presentation Peter Hamill launched the findings of the survey into Children’s Ministry in the Diocese.

The Mothers’ Union also gave a presentation on initiatives to help families in the diocese, and Richard Ryan, acting manager of the Good Book Shop, outlined a number of initiatives to enourage parishes to support the bookshop.

The business of the Synod got underway at 6.30pm. Prior to that, Synod Members will participated in a Service of Holy Communion at 4.30pm, followed by an excellent evening meal prepared and served by St Patrick’s Mothers’ Union. Business concluded before 9pm.