Rector of Lambeg aiming to preach himself into the record books 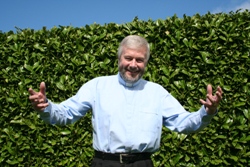 A Connor rector is hoping to preach himself into the record books.

Five years ago the Rev Ken McReynolds held the unofficial record for the longest uninterrupted sermon ever preached – which lasted five hours.

But that mammoth effort was beaten by a clergyman in the south of England who exceeded it by 30 minutes.

Now Mr McReynolds, rector of Lambeg Parish, is hoping to preach non-stop for six hours and put his name once again in the records. He is basing his target on Ezra who Nehemiah 8 records as having stood on a wooden platform and read the Law ‘from daybreak till noon’ – a period estimated to be six hours.

“When I did the last sponsored preach I enquired about getting into the Guinness Book of Records, but they don’t have a section for preaching. It would come under public lecturing, and the rules there state you can have a 10 minute break every hour – it is a different league,” he said.

“When I set my last record I did not leave the pulpit for five hours and seven people sat and listened to the whole sermon. I made enquiries afterwards to see if any other clergy had preached for that long. No-one had, so I claimed the record.

“Then I got the call from the south of England to say it had been beaten.

Mr McReynold’s last record breaker raised £3,000 towards church restoration funds. He is hoping this next attempt in aid of the Church Army Evangelist Training Fund will be just as successful, but he now knows the pitfalls of preaching for such a long time.

“Obviously the pulpit doesn’t have a toilet, yet you need water to lubricate your throat, so you have to control how much you drink,” he said.

“My biggest problem last time was I had decided I would have to watch my voice, so I started off preaching quietly, but I love preaching, and within 15 minutes I was preaching normally, raising my voice and gesticulating. That got my wife worried!”

Although only seven brave souls listened to his entire five hour sermon, there were never less than 30 parishioners in the church at any one time, and more than 70 turned up at some stage during the record breaking attempt.

Now Mr McReynolds wants to do it all again. Monies raised for the Church Army Evangelist Training Fund will support Craig Dowling, a student from Lambeg Parish.

Anyone wanting to support the event can do so by either sponsoring the rector to complete the marathon sermon or by raising sponsorship for themselves to listen to it all!

The sponsored preach gets underway at 10am on Saturday October 30. Donations by cheque made payable to Lambeg Parish Church can be sent to Mr Neill Wilson, 3 Glencourt Close, Ravarnet Road, Lisburn, Co Antrim, BT27 5UR.