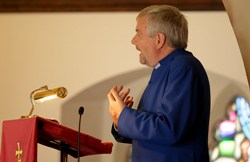 The Lambeg rector’s successful attempt to reclaim the record he held five years ago has also raised more than £3,000 for the Church Army Evangelist Training Fund.

Eight of Mr McReynolds' faithful flock remained in church for the duration of the sermon, and others dropped in for sections of it. “At no time were there less than 40 people or so listening which was a relief as I was dreading ending up preaching to just one person,” said Mr McReynolds. “Thankfully it was well supported.”

Five years ago Mr McReynolds held the unofficial record for the longest uninterrupted sermon ever preached – which lasted five hours – but this was later beaten by a clergyman in the south of England who bettered it by 30 minutes.

Now Mr McReynolds has got his record back. Sadly it will remain an ‘unofficial’ record as he says Guinness’s rules on public speaking allow a 10 minute break every hour. “If I was to work under that principal then I could have gone on all day,” he said.

As it was his biggest concerns posed little or no problem. He only ate a light breakfast and took sips of water, and so did not need the bathroom, and when his voice began to go hoarse early on his wife produced a honey and lemon cure which did the trick. He did admit to growing hungry, getting tired standing, and having a sore back at the end.

One of the biggest challenges was the preparation. Mr McReynolds set his six hour preaching target on Ezra who Nehemiah 8 records as having stood on a wooden platform and read the Law ‘from daybreak till noon’ – a period estimated to be six hours.

And so he had to write a six hour sermon, which took up most of his waking hours in the week before the event. “Most of the work went into writing the sermon. I prepared for it as I would a normal sermon except this was the equivalent of 24 sermons. I was quite tired by the time I actually started preaching so for that reason I can’t see me doing it again. If someone breaks my record, they can keep it,” he said.

The topic of the marathon sermon, which got underway at 10am, was ‘The Principals of Living,’ and in it Mr McReynolds drew on the experience of various Biblical characters. “I kept it vague and yet consistent so people could follow it at whatever stage they joined in,” he said. 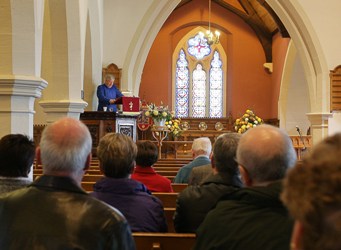 As it happened he got to the end of his prepared sermon 10 minutes short of the six hours, and as he had broken the record decided to stop there rather than improvise for the final 10 minutes.

“I really enjoyed it. Preaching is something I enjoy in normal circumstances. I was a bit apprehensive at the start because six hours is almost a working day but I got through it ok.”

His unusual record attempt captured the imagination of the media and the rector of Lambeg has found himself something of a celebrity. But all the publicity has helped raise awareness of the aim of the preaching marathon, and he has already exceeded his £3,000 target, with money still coming in.

Mr McReynolds was back in front of the church on Sunday morning, but although he conducted the service he left the preaching to someone else. However, he was back in preaching mode on Sunday evening!

Monies raised for the Church Army Evangelist Training Fund will support Craig Dowling, a student from Lambeg Parish, and anyone wishing to register their support for Mr McReynold’s record-breaking sermon can still make a donation. Cheques should be made payable to Lambeg Parish Church can be sent to Mr Neill Wilson, 3 Glencourt Close, Ravarnet Road, Lisburn, Co Antrim, BT27 5UR.