Dean of Belfast announces his retirement 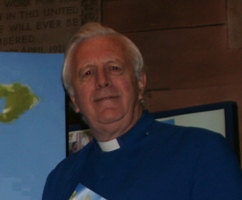 The Dean of Belfast, the Very Rev Dr Houston McKelvey, OBE, has told his congregation in St Anne’s Cathedral that he is to retire next April.

He has been Dean of Belfast since June 2001 and is well known as the city’s Black Santa, faithfully keeping up a fundraising tradition that began in 1976.

Following his announcement on Sunday November 7, Dean McKelvey was commended by his drive, energy and robust approach to life by the Ven Dr Stephen McBride, Commissary to the Bishop of Connor.

Dean McKelvey was ordained in 1967 and served in two suburban parishes. For 19 years prior to becoming dean, he was adviser on education policy in Northern Ireland to the Church of Ireland General Synod Board. He currently serves on the Belfast local education authority and on the boards of governors of schools in socially deprived Roman Catholic and Protestant areas.

A former Territorial Army Chaplain with 29 years service to the Ulster and Scottish Gunners, Dean McKelvey was the first chaplain to be awarded the Queen’s Volunteer Reserve Medal, presented by Her Majesty The Queen. 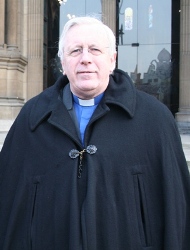 He is a former member of the Police Authority for Northern Ireland, and serves as a county chaplain for scouts. The Dean is also known as writer and local broadcaster, he is a former editor of The Church of Ireland Gazette.

In January 2010 he was awarded an OBE in the Queen's New Year's Honours list for services to community.

Dean McKelvey was educated at Muckamore Primary School, the Royal Belfast Academical Institution; The Queen's University in Belfast from which he has a primary honours degree in geography and a Masters in Education; Trinity College, Dublin – theology; and a Doctor of Ministry degree from the Methodist seminary at North-Western University, Evanston, Illinois.

He now plans to get his 10th annual sit-out for charities with members of the Cathedral Chapter underway on Thursday December 16.

The so-called Black Santa sit-out has raised millions of pounds for different charities over the years, and the Dean said it "demonstrates the charitable nature of the overwhelming majority of people in this part of Ireland."

He continued: "To be the leader of the team organising the sit-out is a tremendous experience which is only surpassed by actually being at the receiving end of so much generosity.

"The experience is breath-taking both physically and spiritually. Charity is indeed the greatest of the Christian and human virtues," he said.

During his time as Dean of Belfast, the Spire of Hope was erected, the positions of ecumenical canons were established and the partnership with St Peter's Cathedral strengthened.

Paying tribute to the Dean, Archdeacon McBride said: “The ministry of the Very Rev Dr Houston McKelvey is notable for the wide range of key activities in which he has been involved in the life of the Church.

“The Dean has contributed with energy and drive across many areas of Church life and beyond, in the fields of education, communication and ecumenism. He has always shown a robust approach to life and a capacity for getting across his views in a forthright manner, a characteristic of many larger-than-life Instonians.

“Throughout his ministry he has been ably supported and complemented by his wife Roberta, who through her Mothers’ Union role has also contributed much on the national and international stages”

The Archdeacon continued: “As a chaplain in the Territorial Army, the Dean was the first reserve forces chaplain to be awarded the Queen’s Volunteer Reserve Medal in 2000 and his service to the community was recognised with the award of the OBE in 2010.

“I wish Houston well as he makes preparations for his final black Santa sit-out next month and hope that he will have many years of happy retirement.”