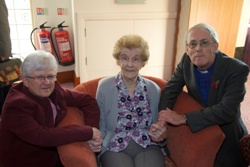 Congratulations to Mrs Emily McGill, a parishioner of St Bartholomew’s, Stranmillis, who celebrated her 100th birthday at a party with family and friends.

Emily, born on November 14 1910 in west Belfast, is the fifth of 11 children.  She attended St Matthew’s Parish Church, Shankill Road, and it was here she married Bertie McGill in 1940. The couple had three children but Emily was widowed 43 years ago when Bertie died in 1967 at the age of 59.

Emily has many stories to tell, but her daughter Jennifer McKeown recounted one of the most dramatic. The young Emily was seriously wounded during the Belfast Blitz in 1941 when she was struck by shrapnel on her right shoulder. She was presumed dead but was taken to hospital where she remained for a month, remarkably overcoming surgery, blood transfusions and gangrene.

And demonstrating what stern stuff she is made of Emily went on to have her first child, named Bertie after his dad, in 1942. Second son Rodney followed, then daughter Jennifer.

Prior to her marriage, Emily had worked in Gallagher’s Factory, but did not return to work after the children were born. Her husband worked in Issac Andrew’s Flour Mill and was a fireman during the war.

In her early 50s Emily joined the St Matthew’s ladies indoor bowling club. She went on to set up a ladies team at the Woodvale outdoor club – previously a male only domain – and later moved to Belfast ladies.  Her skill on the green meant Emily began to make a name for herself.  She competed in the Northern Ireland Indoor Championships in the late 1960s and was soon selected for the international team. At the age of 76 she was on a Fours team which won the British Isles title. Emily continued to bowl indoors well into her 80s.

She also enjoys travelling and when she was 85 she flew on her own to Australia to attend her son’s wedding.

Emily went to live with her daughter Jennifer in East Belfast 20 years ago, and so moved from St Matthew’s Parish to St Bartholomew’s. She is a member of St George’s Mothers’ Union, where her grandson is a choirboy.

Jennifer said her mother’s health is very good although her hearing has declined. She enjoys going out for drives and walks along the sea front. She insists on having her tea served in a china cup, and has never smoked or drank alcohol in her life.

“She always worked hard.  As a child there was many a day she went to school hungry. She was awarded a scholarship to grammar school but could not take it up as she had to go out to work at the age of 13, yet she saw that all of us had an education,” said Jennifer.

“She has always had a very strong belief in God through thick or thin and that has stood for her. She always takes her worries and her joys to him every day and you can still hear her saying her prayers every morning and every evening. “

Joining the party in the Stormont Hotel on November 14 was the Rev Ron Elsdon, rector of St Bartholomew’s, and his curate the Rev Janice Elsdon.