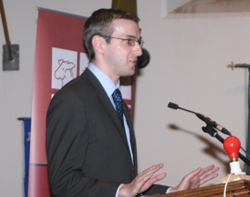 The Good Book Shop, Belfast, is planning a year-long marathon bible reading session to celebrate the 400th anniversary of the King James Version of the bible.

The entire bible will be read aloud in The Good Book Shop every weekday afternoon (Monday to Friday) at 4pm starting January 4 and ending December 23 2011. The initiative is entitled KJV@ 4:00

Richard Ryan, acting manager of The Good Book Shop, said: “It's a massive undertaking, but I’m already getting a lot of support for it. We are looking for volunteer readers who would be interested in taking part in this unique event, and it will be open to everyone who wants to read including clergy, lay readers, youth workers, Sunday school groups and of course our own customers.”

A poster promoting the event can be downloaded here.

The first reader on January 4 will be the Archbishop of Armagh and Primate of All-Ireland, the Most Rev Alan Harper, OBE, who will also officially launch the event.

Anyone interested in becoming a reader should email Richard at sales@goodbookshop.com