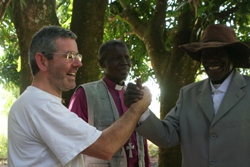 Archdeacon Stephen Forde, chair of Connor Council for Mission, will be part of a Church of Ireland delegation to meet with Irish Foreign Affairs Minister Micheál Martin to discuss concerns for the future of Sudan.

All three have visited Southern Sudan this year – Archdeacon  Forde was there in January and both he and Canon Wilson were part of the Connor Mission Experience Team Abroad (META) which went to Sudan in July. David Gough is a regular visitor to the area. Connor Diocese is in partnership with Yei Diocese in Southern Sudan.

The Church of Ireland Sudan Partnership Group was formed to act as a voice for the people of Southern Sudan in advance of a referendum on the country’s future taking place on January 9 2011.

In particular, Archbishop Deng is concerned that registration of voters will not be carried out in a fair way, that the borders around Abyei have still not been demarcated and that the people of the Nuba Mountains and Blue Nile will not be accorded full rights of self-determination. He also voiced concern about unresolved issues of citizenship which he alleged are being used to threaten southerners currently living in the north.

Of the £3.05 million CMSI has committed to Southern Sudan, £500,000 has been raised directly by Church of Ireland parishes and individuals to build primary schools, health centres, and to support agricultural development and teacher and skills training.

It is within this context of extensive engagement with the people and church in Southern Sudan that the Sudan Partnership Group is seeking meetings with politicians at Stormont, in Westminster and in Dublin. It is asking what measures governments are taking to ensure the terms of the Comprehensive Peace Agreement will be followed.  And the group will express its hope that should the population of Southern Sudan vote for separation from the North, governments will exert influence, both directly and through international partnerships, to ensure that the democratic will of the people of Southern Sudan is honoured without recourse to further civil war.

Interviewed during a visit to the UK and America by Archbishop Deng, the Archbishop of Canterbury Rowan Williams raised the spectre that renewed conflict between the northern forces of the Government of Sudan and the population of Southern Sudan could “eclipse the suffering witnessed in Darfur.”

Archbishop Harper has called upon the international guarantor governments, signatory to the Comprehensive Peace Agreement of 2005, to ensure full implementation of the agreement including free and fair elections. He stated: “I also call upon people everywhere, and especially in the Church of Ireland, to pray for our brothers and sisters in Sudan.  Pray especially that Sudan may not fall back into a war which will destroy more lives and communities bringing further misery to a land that has seen so much horror in the recent past.”

Through lobbying government and raising awareness of the forthcoming referendum, the Sudan Partnership Group seeks to ensure that this situation does not occur.

The first nine days of January 2011 have been identified as a ‘Period of Prayer for Sudan.’ The Sudan Partnership Group is appealing to everyone to pray for Sudan in all the days before, and after, the referendum.